2. Dylan O’Brien suffered serious injuries when he was dragged under the vehicle which he was strapped on to when he fell on top of its roof while filming the opening train chase sequence on March 17, 2016.

3. There’s a scene where Teresa and Ava are presenting their data to board members at WCKD. One member, the only one not to speak a word, is none other than the author of the book series, James Dashner.

4. Ironically, the hardest and most dangerous scene to film, the opening train sequence, the scene that caused the movie to be delayed for a year, wasn’t even in the book. 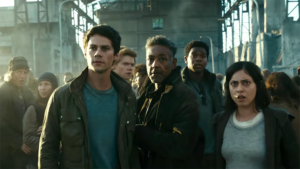 5. The WCKD buses have Colorado plates. The Last City in the movie is described in the book as being set in Denver.

6. The movie was first released in South Korea, where Ki Hong Lee was born.

7. Kaya Scodelario, who plays Teresa, performed her own stunts for the movie.

8. Brenda’s hair is more similar in length to how it was in the book, rather than being short like in the last movie. It was most likely done because Rose Salazar, who plays Brenda, was filming Alita: Battle Angel at the same time as this movie, which required her to have longer hair.

9. In the movie, it’s shown that Thomas’ blood contains the cure for the flare virus. In the books, it’s neither his blood that is the cure nor a definite fact that he could be used as one. The scientists instead try to convince Thomas to give them his brain in the hopes of finding a cure with deeper investigation.

10. At one point, Maze Runner: The Death Cure held the title for the highest grossing movie worldwide of 2018 from Insidious: The Last Key until the week of Valentine’s Day, which was the second week of Fifty Shades Freed and the release week of Black Panther. 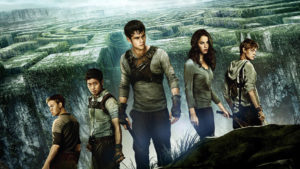 11. After the WCKD headquarters are in lockdown, Ava tells Teresa to leave as the last train out is in 38 minutes. That’s the exact amount of time left until the end credits rolled in.

12. In Scorch Trials, Thomas had a hallucination after a drink from Marcus where he first saw Winston as a Crank. Secondly, Thomas saw Newt as a Crank, foreshadowing his fate.

13. In the book, Thomas kills Newt because he begged him to with a hand gun. In the movie, Newt still begs him to kill him, but it happens in a scuffle accidentally and it’s done with a knife.

14. Despite prominent billing, Nathalie Emmanuel, Jacob Loftland and Katherine McNamara have less than 10 minutes of screentime.

15. As a joke, the memorial that appears at the end also contained names of several crew members as well as director Wes Ball and lead actor Dylan O’Brien.

16. In the book, it’s revealed that Brenda and Jorge were working for WCKD; however, this is cut in the movie.

17. In the book, they actually go back inside the Maze, and jump in a portal that takes them to the safe haven, and Thomas never gets shot. 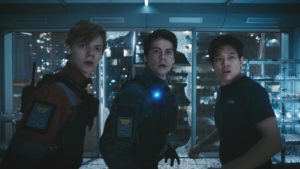 18. It’s hinted in the second Death Cure trailer that the movie will follow Newt’s original book ark. This is seen by the black veins visible on his neck, and the bags under his eyes. In the book, he begins to turn into a Crank due to his blood not having immunity to the flare and Thomas must kill him before he fully turns.

19. In the book, Minho is never captured. It’s actually Newt who gets captured half way through the novel, resulting in them having to go to a place WCKD keeps Cranks locked up to rescue him, a scene completely cut from the movie.

20. Ava Paige plays a much bigger part in the movie series, while in the books, she was simply a mysterious character that wrote notes serving as epilogues for each novel.

21. In the book, Thomas kills Janson in a fist fight, similar to how he took out Gally in the first book. However, much like how Gally’s “death” was changed, Janson is killed by Crank test subjects in the movie.

22. Newt being infected by the Flare is general knowledge at the beginning of the book, but is kept a secret for the first half of the movie.

23. Due to events changed from book to screen in the previous movie, Thomas doesn’t hate Aris at the beginning of the movie. In fact, he’s glad to see him, unlike in the book where he couldn’t trust him anymore. 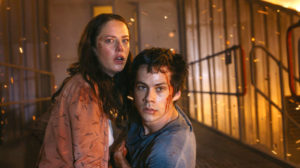 24. Four main characters die over the course of Maze Runner: The Death Cure. They are: Newt, Teresa, Janson and Dr. Ava Paige.

25. The scene where they pick up the bus with a crane doesn’t occur in the book.

26. Only a small part of the book takes place in the Last City. The book jumps from location to location, from the Last City, to a place WCKD keeps Cranks, to the climax being set in another Maze.

27. At the end of the movie, when Thomas is reading Newt’s letter, Thomas Brodie-Sangster was actually right next to Dylan reading it aloud to make it more emotional.