Charles Martel was a Frankish statesman and military leader who as Duke and Prince of the Franks and Mayor of the Palace, was the de facto ruler of Francia from 718 until his death. The son of the Frankish statesman Pepin of Herstal and a noblewoman named Alpaida, Charles successfully asserted his claims to power as successor to his father as the power behind the throne in Frankish politics. Take a look below for 27 more awesome and interesting facts about Charles Martel.

1. Continuing and building on his father’s work, he restored centralized government in Francia and began the series of military campaigns that re-established the Franks as the undisputed masters of all Gaul.

2. After establishing unity in Gaul, Charles’ attention was called to foreign conflicts with the Islamic advance into Western Europe a foremost concern.

3. In October 732, the army of the Umayyad Caliphate led by Al Ghafiqi met Frankish and Burgundian forces under Charles between the cities of Tours and Politiers, leading to a decisive, historically important Frankish victory known as the Battle of Tours.

4. After the Battle of Tours, Charles took the offensive, destroying fortresses at Agde, Beziers and Maguelonne, and engaging Islamic forces at Nimes, though ultimately failing to recover Narbonne or to fully reclaim the Visigoth’s Narbonensis. 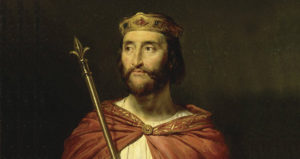 5. After, he made significant further gains against fellow Christian realms, establishing Frankish control over Bavaria, Alemannia, and Frisia, and compelling some of the Saxon tribes to offer tribute.

6. Apart from his military endeavors, Charles is considered to be a founding figure of the European Middle Ages.

7. Skilled as an administrator as well as a warrior, he’s credited with a seminal role in the emerging responsibilities of the knights of courts, and therefore, in the development of the Frankish system of feudalism.

8. Pope Gregory III, whose realm was being menaced by the Lombards, and who couldn’t rely on the help from Constantinople, asked Charles to defend the Holy See and offered him the Roman consulship, though Charles declined.

9. Charles divided Francia between his sons, Carloman and Pepin. 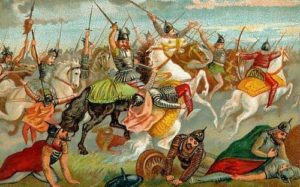 10. Charles’ grandson, Charlemagne, extended the Frankish realms to include much of the West, and became the first Emperor in the West since the fall of Rome.

11. “Martel” means “The Hammer.” He earned this name by enforcing his power through military strength.

12. Charles had to fight off several battles against other realms of Francis and his step mother, Plectrude, to finally restore the Kingdom to its former geographical shape in 718 AD.

13. In older historiography, it was common to describe Charles as “illegitimate.”

14. Charles married twice, his first wife being Rotrude of Treves, daughter either of Lambert II, Count of Hesbaye, or of Leudwinus, Count of Treves.

15. He had a known mistress, Ruodhaid, with whom he had three children with: Bernard, Hieronymus, and Remigius, the latter who became an archbishop of Rouen.

16. Charles is the father of heavy cavalry in Europe, as he integrated heavy armored cavalry into his forces.

17. His army was the first standing permanent army since the fall of Rome in 476. At its core was a body of tough, seasoned heavy infantry who displayed exceptional resolution at Tours.

18. Charles had taken the money and property he had seized from the church and paid local nobles to supply trained ready infantry year round. 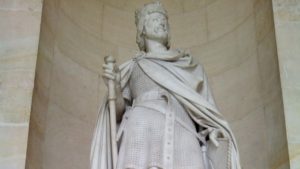 19. It was Charles’ creation of a system whereby he could call on troops year round that gave the Carolingians the first standing and permanent army since Rome’s fall in the west.

20. The defeats that Charles inflicted on the Muslims were vital in that the split in the Islamic world left the Caliphate unable to mount an all-out attack on Europe via its Iberian stronghold after 750.

21. Just as his grandson, Charlemagne, would become famous for his swift and unexpected movements in his campaigns, Charles was renowned for never doing what his enemies forecast he would do, and for moving far faster than his opponents believed he could.

22. During the last years of his life, Charles divided his realm between his sons without opposition, though he ignored his youngest son Bernard.

23. Charles was a brilliant strategic general, who also was a tactical commander and was able, in the heat of battle, to adapt his plans to his foe’s forces and movement. 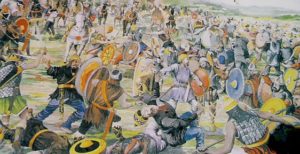 24. Charles had the last quality which defines genuine greatness in a military commander: he foresaw the dangers of his foes, and prepared for them with care.

25. He died on October 22, 741, at Quierzy-sur-Oise in what is today the Aisne department in the Picardy region of France.

26. He was buried at Saint Denis Basilica in Paris.

27. His territories had been divided among his adult sons a year earlier: to Carloman he gave Austrasia, Alemannia, and Thuringia, and to Pippin the Younger Neustria, Burgundy, Provence, and Metz and Trier in the “Mosel duchy;” Grifo was given several lands throughout the kingdom, but at a later date, just before Charles died.