Wilhelm Conrad Rontgen was a German mechanical engineer and physicist, who, on November 8, 1895, produced and detected electromagnetic radiation in a wavelength range known as X-rays, or Rontgen rays, an achievement that earned him the first Nobel Prize in Physics in 1901. Take a look below for 26 more interesting and fun facts about Wilhelm Rontgen.

1. In honor of his accomplishments, in 2004 the International Union of Pure and Applied Chemistry named element 111, roentgenium, a radioactive element with multiple unstable isotopes, after him.

2. Rontgen was born in Lennep, Germany, and was the only child of a cloth merchant.

3. In 1848, the family moved to Apeldoorn, the Netherlands, where he attended the Institute of Martinus Herman van Doorn.

4. In 1869, he earned his PhD from the University of Zurich and went to Wurzburg to work. 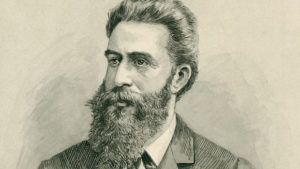 6. In 1875, he became a professor in the Academy of Agriculture in Wurttemberg.

7. In 1876, he became a professor of Physics at Strasbourg University.

8. His interest in problems in physics was broad and he studied the characteristics of quartz and the influence of pressure on the refractive indices of fluids.

9. In 1879, he accepted the post of chair of Physics at the University of Giessen. 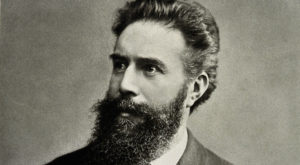 10. Although he was invited to teach at many universities, in 1900, he finally accepted the position as chair of Physics at the University of Munich, where he remained for the rest of his life.

11. He had family in Iowa and purchased tickets to immigrate to the United States, but the outbreak of World War I changed his plans.

12. In 1895, he was studying the results of low pressure gas on an electric current.

13. He found that even though the experiment was conducted in a very dark room, a plate covered in barium platinocyanide became fluorescent.

14. Rontgen continued to experiment with the photographic plates and cathode ray tubes.

15. On November 8, 1895, Rontgen covered a thick glass tube in heavy black cardboard and generated an electric spark with a Ruhmkroff coil. When he was preparing the next step of the experiment, he noticed a shimmering on the barium platinocyanide screen on his bench. He thought that this might indicate a new kind of ray and he continued his experiments.

16. In 1895, he placed his wife’s hand between the discharge tube and the plate which showed her a sharper image of the bones of her hand and her ring and a fainter image of the rest of her hand. This was the first X-ray. 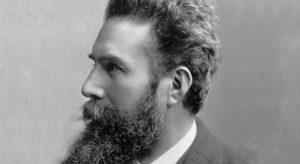 18. In 1901, Rontgen won the first Nobel Prize in Physics for, “the extraordinary services he has rendered by the discovery of the remarkable rays subsequently named after him.”

19. Rontgen donated the monetary reward from his Nobel Prize to his university.

20. Like Pierre Curie, Rontgen refused to take out patents related to his discovery of X-rays, as he wanted society as a whole to benefit from practical applications of the phenomenon.

21. Rontgen was awarded the Barnard Medal for Meritorious Service to Science in 1900.

22. In 1907, he became a foreign member of the Royal Netherlands Academy of Arts and Sciences.

23. Today, in Remscheid-Lennep, 40 kilometers east of Dusseldorf, the town in which Rontgen was born in 1845 is the Deutsches Rontgen-Museum.

24. In Wurzburg, where he discovered the X-rays, a non-profit organization maintains his laboratory and provides guided tours to the Rontgen Memorial Site.

25. Rontgen Peak in Antarctica is named after him.

26. Rontgen was married to Anna Bertha Ludwig. They raised one child, Josephine Bertha Ludwig, whom they adopted at the age of 6 from Anna’s brother in 1887.