Sicario is a 2015 American crime thriller movie directed by Denis Villeneuve, written by Taylor Sheridan and starring Emily Blunt, Benicio del Toro, Josh Brolin and Victor Garber. The movie follows a principled FBI agent who is enlisted by a government task force to bring down the leader of a powerful and brutal Mexican drug cartel. Take a look below for 26 more interesting and fascinating facts about Sicario.

1. Sicario was selected to compete for the Palme d’Or at the 2015 Cannes Film Festival.

4. Emily Blunt based Kate Macer’s character on one of four female FBI agents she spoke to in preparation for the role, whom she described as “shy” and with a “loner quality” to them. 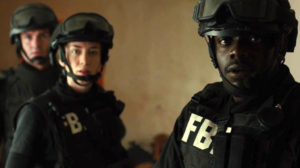 5. Cinematographer Roger Deakins was inspired by the photography of Alex Webb, especially his “Crossings: Photographs from the U.S. – Mexico Border,” published in 2003.

6. The banner in Juarez is hard to read, but the phrase “Los Estamos Observando” can clearly be seen, which translates to, “We are watching you.”

8. Director Denis Villeneuve wanted Emily Blunt for the role after seeing her in The Young Victoria.

9. Having just completed the movie Everest, an exhausted Josh Brolin originally turned down Sicario, until cinematographer Roger Deakins sent him an email imploring him to join the cast. Since it was so uncharacteristic of Deakins to take this stand, Brolin ultimately changed his mind.

10. While in the motel conducting surveillance with the use of a drone, the latitude/longitude coordinates are shown in the top right of the screen. These coordinates lead to Chapman BMW in Chandler, Arizona.

11. The word “sicario” means “hitman” or “gunman” in Spanish. It also means “paid assassin” in Italian. 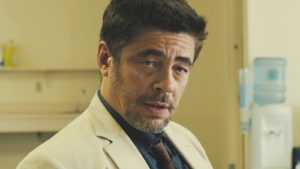 12. The Wild Pony bar is actually on Highway 314 SW in Los Lunas, New Mexico, about 29 miles south of Albuquerque, New Mexico and 425 miles from Tucson, Arizona, where Kate and Reggie were supposed to be.

14. Alejandro’s sidearm of choice is an HK Mark 23, which was selected over the Colt OHWS through USSOCOM’s Offensive Handgun Weapon System program.

16. When they first arrive in Juarez, Mexico, the caravan stops as gunfire is heard in the distance. As Jeffrey Donovan speaks, the camera pans to Benicio Del Toro’s character and focuses on the missing-women posters on the wall. The posters are of his wife and daughter, who were murdered by the cartel.

17. When the team has entered the tunnel, Emily Blunt hits her head on the top of the tunnel. Director Denis Villeneuve said in an interview that he left that take in because it added realness to the mission and the movie itself. 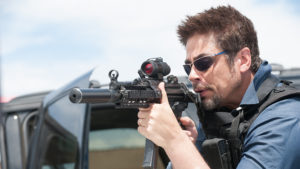 18. Kate smokes Indian Creek cigarettes. The same brand is in the bedroom of Silvio, the corrupt Mexican police officer.

19. Emily Blunt and Benicio Del Toro both appeared in The Wolfman. At the end of this movie, he tells her to move to a new town because this is now, “a land of wolves,” and she wouldn’t survive there.

21. In scene following Kate and Reggie’s discussion in The Wild Pony about her personal hygiene, Kate’s eyebrows are noticeably thinner.

22. The Tahoe SUV’s driven into Mexico by the American team have Texas license plates on them. One of the letters on the plates is an “I.” In Texas, the letters “I” and “O” are never used on plates so they aren’t confused with the numbers one or zero by law enforcement. 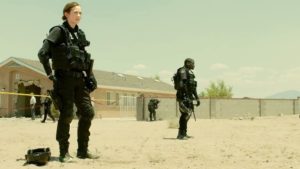 23. When discussing the score with composer Johann Johannsson, director Denis Villeneuve said that he wanted the sound to be threatening. The one movie Villeneuve used as a comparison was Steven Spielberg’s Jaws.

24. Sicario was Denis Villeneuve and cinematographer Roger Deakins’ second collaboration. Their other collaborations were on Prisoners and Blade Runner 2049.

25. According to Denis Villeneuve, Sicario was conceived at the height of the violence in Juarez, Mexico, in 2010.

26. According to Sebastian Rotella, an American foreign correspondent and investigative journalist, Sicario looked at many aspects of the U.S. War on Drugs against, most generally, drug cartels in Mexico, Central and South America.