Body of Lies is a 2008 American action spy movie directed and produced by Ridley Scott. Set in the Middle East, the movie follows the attempts of the CIA and Jordanian Intelligence to catch “al-Saleem,” a terrorist. Frustrated by their target’s elusiveness, differences in their approaches strain relations between a CIA operative, his superior and the head of Jordanian Intelligence. Take a look below for 26 more interesting and fascinating facts about Body of Lies.

1. William Monahan’s screenplay, based on the novel of the same name by David Ignatius, examines contemporary tension between Western and Arab societies and the comparative effectiveness of technological and human counter intelligence methods.

2. The movie was shot largely on location in the United States and Morocco, after authorities in Dubai refused permission to film there because of the script’s political themes.

3. The film’s photography sought to emphasize the contrast between the gold and dust of the desert and Arab cities, and the blue and gray of bureaucracy and Washington. 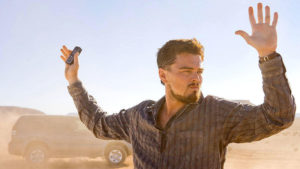 5. For Manchester scenes, which were filmed on actual streets in the United States, any overly “American” curbside item, like certain fire hydrants, were hidden by dropping bottomless slatted metal trash cans over them and then adding prop “English” garbage.

6. Some actors in the exterior Turkish Cafe in the Munich Scene were stage-reading actual Arabic newspapers. The more attentive among them were reading from right to left, which was most noticeable when they turn a page.

7. To extras waiting to join the “Terrible Neighborhood” and “Terrible Flat” scenes, a wardrobe specialist announced, “Please remove your personal jewelry including school rings and weddings bands; this is supposed to be a gritty neighborhood full of crackhouses and you’re poor… you hocked all of your jewelry – for drugs.”

9. Mark Strong initially turned down a role because his wife was pregnant. He changed his mind after his wife encouraged him to take the role anyway. 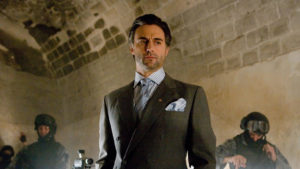 10. Carice van Houten actually played the character of Roger’s wife Gretchen Ferris, but all her scenes were deleted and she doesn’t appear in the final cut. The movie does provide dialogue that distills the story in the book, when Roger says they are getting divorced because, “I was a bad husband and she was a worse wife.”

11. The Amsterdam scene in the picture was actually shot at Eastern Market, a historic marketplace in Southeast Washington, D.C., which hosts weekend food and flea market vendors.

12. Actors portraying British police wore full regalia including a tie, utility belt, regimental insignia, and a bulletproof jacket, even though none of these were visible under their blaze yellow police emergency response raincoats.

14. When Ferris first meets with Hani, he’s asked about what he has heard about Hani’s unit of intel gathering and interrogation methods. He responds by saying, “finger-nail factory.” Mark Strong was in the movie Syriana and tortured George Clooney’s character by pulling out his finger nails.

16. To get just the right look during a massive pyrotechnic explosion while also not damaging still occupied neighborhood buildings, technicians used a “car chucker” to fling a vehicle violently. The fridge door sized steel plate has a powerful spring hinge device able to catapult cars for specified distances.

17. Body of Lies was the first time Leonardo DiCaprio and Russell Crowe have been in a movie together since The Quick and the Dead.

18. The soccer match that Aisha’s nephews are watching on TV is a Nationwide League Division Three match between Yeovil Town and Torquay United. The match was played on September 27th, 2003.

19. Ayesha’s nephews are called Yousuf and Rowley. Rowley is an unusual name for a Muslim boy and it stands out. It’s possibly a nod to the FBI whistleblower of the same name.

20. Body of Lies is the first time that Ridley Scott and Leonardo DiCaprio have collaborated on a movie together as director and actor.

21. Body of Lies is Golshifteh Farahani’s first appearance in a major American movie. 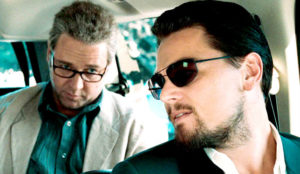 22. Over the course of filming the Terrible Neighborhood scene, two tanker truckloads of water were sprayed onto the location neighborhood streets because, for looks, wet roadways were considered preferable to dry pavement.

23. Mark Strong and Simon McBurney would later co-star in Tinker Tailor Soldier Spy, which is another espionage thriller movie.

24. Ridley Scott has made a previous movie about the conflict between the Western and Arab civilizations called Kingdom of Heaven, set during the Crusades. Body of Lies resumes this theme in the context of modern intelligence operations and terrorism.

25. Body of Lies was Alexander Witt’s first credit as a director of photography.

26. The film score was composed by Marc Streitenfeld, who has now composed music for Ridley Scott for three features.