Archimedes of Syracuse was a Greek mathematician, physicist, engineer, inventor and astronomer. Although few details of his life are known, he’s regarded as one of the leading scientists in classical antiquity. He’s generally considered the greatest mathematician of antiquity and one of the greatest of all time. Take a look below for 26 more interesting and awesome facts about Archimedes.

1. Archimedes anticipated modern calculus and analysis by applying concepts of infinitesimals and the method of exhaustion to derive and rigorously prove a range of geometrical theorems, including the area of a circle, the surface area and volume of a sphere, and the area under a parabola.

2. Other mathematical achievements include deriving an accurate approximation of pi, defining and investigating the spiral bearing his name, and creating a system using exponentiation for expression very large numbers.

3. He was one of the first to apply mathematics to physical phenomena, founding hydrostatics and statics, including an explanation of the principle of the lever.

4. Archimedes is credited with designing innovative machines, such as his screw pump, compound pulleys, and defensive war machines to protect his native Syracuse from invasion. 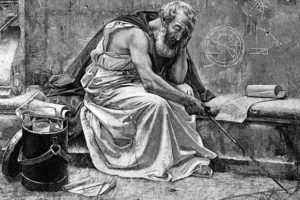 5. He died during the Siege of Syracuse, when he was killed by a Roman soldier despite orders that he should not be harmed.

6. Cicero describes visiting the tomb of Archimedes, which was surmounted by a sphere and a cylinder, which Archimedes had requested to be placed on his tomb to represent his mathematical discoveries.

7. Mathematicians from Alexandria read and quoted him, but the first comprehensive compilation of his work wasn’t made until 530 AD by Isidore of Miletus in Byzantine Constantinople.

8. The relatively few copies of Archimedes’ written work that survived through the Middle Ages were an influential source of ideas for scientists during the Renaissance, while the discovery in 1906 of previously unknown works by Archimedes in the Archimedes Palimpsest has provided new insights into how he obtain mathematical results.

9. There are very few accurate details recorded about the life of Archimedes, including his exact birth and death years.

10. His system for expressing multiple digit numbers was considered very impressive for his day. 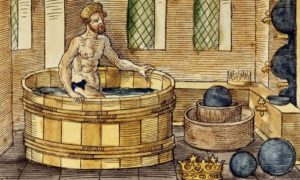 11. Some of his machines were able to destroy enemy ships by lifting them from the water, and other provided defense by using complicated alignments of mirrors to set them on fire.

12. According to legend, Archimedes was given the task of determining if the king’s crown was solid gold, or had silver mixed in; due to its irregular shape it was hard to tell, until Archimedes displaced water from his bathtub and realized that he could determine the density of materials.

13. He’s credited with developing manual screw turns that served as a bilge pump for what was the biggest ship ever built in its day.

14. Archimedes proved that to multiply numbers written as exponents, the exponents should be added together.

15. He showed how exponents could be used to write bigger numbers than had ever been thought of before.

16. He invented the Archimedean Screw to pull water out of the ground. The device is still used around the world today.

17. Archimedes was the first person to apply lessons from physics, such as the law of the lever, to solve problems in pure mathematics. 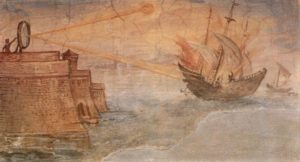 18. Archimedes invented war machines such as a highly accurate catapult, which stopped the Romans from conquering Syracuse for years. It’s now believed that he may have done this by understanding the mathematics of projectile trajectory.

19. He directly inspired Galileo Galilei and Isaac Newton to investigate the mathematics of motion. Archimedes’ surviving works finally made it into print in 1544. Leonardo da Vinci was lucky enough to have seen some of the hand copies works of Archimedes before they were eventually printed.

20. Archimedes was very frustrating, because he gave clues, but didn’t reveal his full methods. In truth, Archimedes enjoyed teasing other mathematicians. He would tell them the correct answer to problems, then see if they could solve the problems for themselves.

21. The mystery of Archimedes’ mathematics wasn’t solved until 1906, when Professor Johan Heiberg discovered a book in the city of Constantinople, Turkey.

22. The last words attributed to Archimedes are, “Do not disturb my circles,” a reference to the circles in the mathematical drawing that he was supposedly studying when disturbed by the Roman soldier. 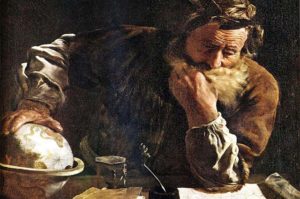 23. The tomb of Archimedes carried a sculpture illustrating his favorite mathematical proof, consisting of a sphere and a cylinder of the same height and diameter.

24. He was sent to Alexandria, Egypt to receive his education. His major interests besides math and science included politics, poetry, astronomy, art, military tactics and music.

25. Archimedes grew up to be a great scientist under the guidance of two of the greatest scholars and mathematicians of the time, Conon of Samos and Eratosthenes of Cyrene.

26. The Archimedes Principle states that any object immersed in a fluid is buoyed upwards by a force equal to the weight  of the displayed fluid.