Emus, or Dromaius novaehollandiae, belong a group of flightless running birds known as ratites. They’re one of the most primitive of all the modern bird families. Emus are only found in Australia. Take a look below for 26 more fun and interesting facts about emus.

1. Emus are found all over Australia, ranging from the coastal regions to high up in the Snowy Mountains. However, most of them are found in the savannah woodlands and sclerophyll forests.

2. They’re the second largest living bird when measured by height. The first is its ratite relative, the ostrich.

6. Female emus are slightly bigger than the males, but they’re substantially wider across the rump.

7. An emu’s neck is pale blue and shows through its sparse feathers. 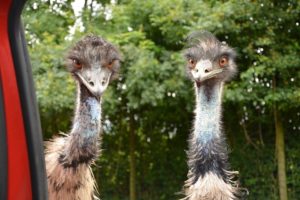 8. They have grey brown plumage that’s shaggy in appearance. The shafts and the tips of their feathers are black. The plumage varies in color due to environmental factors; this gives emus a natural camouflage.

9. They have small, useless wings, however, their legs are long and powerful. Emus are the only birds that have any calf muscles. Their feet have three toes and fewer bones and muscles than flying birds.

10. An emu feather has a unique feature, which is the double rachis emerging from a single shaft.

11. Emus have three toes on each foot in a tridactyl arrangement. This is an adaptation for running that’s seen in other birds, such as quails and bustards. On the other hand, an ostrich has two toes on each foot.

12. They’re known for traveling long distances at a fast trot and sprinting at 48 kilometers, or 30 miles, per hour for a shorter distance. When running, their stride can be almost 2.7 meters, or 9 feet, long.

13. They’re very good swimmers. They have even been recorded playing in the water and mud.

15. They’re omnivores, which means that they each both plant and animal based food. Their diet consists of seeds, fruit, bark, nuts, stems, insects, small reptiles, amphibians and other small animals. 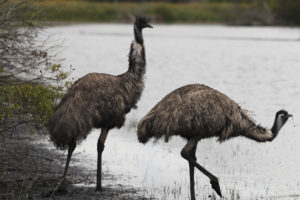 16. They’re diurnal birds, which means that they spend their day foraging, preening their plumage, dust bathing and resting.

17. Emus need a lot of water. They’re known for drinking 9 to 18 liters, or 2.5 to 5 gallons, of water daily. If they’re not disturbed, they can drink water for 10 minutes without stop.

18. They’re known for swallowing small stones, which are sometimes called gastroliths or gizzard stones. These stones stay in their gizzard and help grind up their food.

20. Even though they’re not very social, they have a curious and docile nature.

21. Emus have a pouch in their throat that’s part of their windpipe; it’s used for communication. When the pouch is inflated, the emu can make deep booming, drumming and grunting sounds. They make these calls during courtship in the breeding season. The sounds can be heard up to 2 kilometers, or 1.2 miles, away.

22. They’re known for having good eyesight and hearing, which allows them to detect predators from a distance.

23. Male emus construct rough nests in semi sheltered hollows on the ground. They use bark, grass, sticks and leaves to line it. 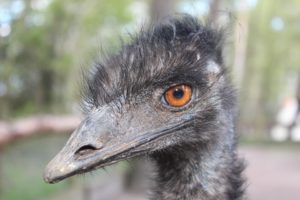 24. Female emus will lay 5 to 15 avocado green eggs over several days. When they’re finished, the female will go off, leaving the male to incubate the eggs. Female emus are known for mating several times and laying several clutches of eggs in one season.

25. They’re able to store fat very efficiently. This allows them to go for a long time without food and allows the male emu to incubate eggs over a 48 to 56 day incubation period. During the entire time, the male won’t eat or drink which leads to him losing up to one third of his body weight.

26. Newly hatched emu chicks are cream colored with dark brown stirpes. The male emu takes care of them for 4 to 6 months. Once they’re between 12 to 14 months old, they’re considered to be full grown. However, they don’t reach sexual maturity until they’re about 2 years old.