Herrings are a marine fish that belong to the Clupeidae family. This family of fish includes around 200 different species. However, the most familiar herring species are the Atlantic, Pacific and Araucanian herring. They prefer to live in temperate waters of the Pacific and Atlantic oceans and they represent 90% of the herrings that humans eat. Take a look below for 26 more fun and fascinating facts about herrings.

1. The size of a herrings depends on what species it is. The biggest species can reach 18 inches in length and can weigh up to 1.5 pounds.

2. They have elongated bodies that are tapered on both ends. They have small heads with protruding lowers jaws. Herrings don’t have a visible lateral line but they do have a tail that’s shaped like a fork.

3. They’re known as the “silver of the sea” because of their silver color and very in demand meat. The upper part of their body is blue in color, while the bottom is pale. Their coloration gives it some camouflage in the water.

4. Unlike many other fish species, herrings don’t have bony fins, they soft ones.

6. They’re known as filter feeders, which means that they swim with their mouth open and swallow water with plankton. The food stays in their mouth while the water goes out of their gills. 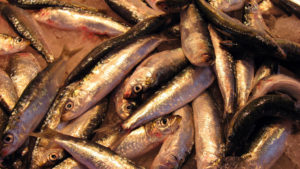 7. Herrings are nocturnal, which means that they’re most active during the night. They spend most of their day in deep ends where they hide from predators.

9. They’re an important part of the human diet because they’re rich in omega 3 fatty acids and vitamin D.

10. Herrings swim in big fish groups called schools. Schools can be made out of billions of herrings.

11. They spawn at different times of the year, depending on the temperature of the water and on the species.

12. Female herrings release between 20,000 and 40,000 eggs into the water. The eggs are fertilized with sperm cells released by male herrings.

13. Fertilized eggs are about 0.039 to 0.055 inches in length. They often fall to the bottom of the sea and attach themselves to stones and vegetation.

14. Eggs are incubated between 11 and 40 days, depending largely on the temperature of the water. Higher temperature accelerates development.

15. The larvae will have transparent bodies and will be about 0.20 to 0.24 inches long. In its first days of life, it will use the leftover yolk as a source of food.

16. When the larvae reach 1.6 inches in length, it will begin to look like a miniature version of a fully grown herring. The young fish will reach sexual maturity when it’s 3 or 9 years old.

18. Adult herring are harvested for their meat and eggs; they’re also often used as baitfish. Herring trade is an important sector in many national economies.

19. Environmental Defense has suggested that the Atlantic herring fishery is an environmentally responsible fishery.

20. Herring larvae are very slender and can easily be distinguished from other young fish by the location of the vent, which lies close to the base of the tail.

21. The most abundant and commercially important herring species belong to the Clupea genus. They’re found in shallow, temperate waters of the North Pacific and the North Atlantic Oceans, including the Baltic Sea, as well as off the west coast of South America.

22. Herring played a pivotal role in the history of marine fisheries in Europe. Early in the 20th century, the study of herrings was fundamental to the evolution of fisheries science.

23. Water pollution influences the amount of herring that can be safely consumed. For example, the large Baltic herring exceeds the recommended limits of PCB and dioxin, though some researchers suggest that the cancer reducing effect of omega 3 fatty acids is statistically stronger than the cancer causing effect of PCBs and dioxins.

24. During the Middle Ages, herring prompted the founding of Great Yarmouth, Amsterdam and Copenhagen. 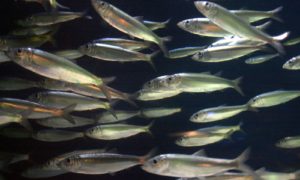 25. Juvenile herring prey on copepods by swimming in a grid and keeping a fixed distance between them, which is equal to the length of the jump of their prey. Since copepods use their antennae to detect predators, they will jump at a constant length to escape them. However, the massive amount of herrings swimming in their direction time the jumps well enough that they can catch many copepods before they escape.

26. A herring school has precise spatial arrangement. This allows them to maintain a relatively constant cruising speed without anyone bumping into each other.