Guava is a common tropical fruit that’s cultivated and enjoyed in many tropical and subtropical regions. Psidium guajava, the common guava or lemon guava, is a small tree in the Myrtle family, Myrtaceae, native to Mexico, Central America and northern South America. Take a look below for 26 more fun and fascinating facts about Guava.

1. Although related species can also be called guavas, they belong to other species or genera, such as the “pineapple guava” Acca sellowiana.

3. There are around 150 species of guava that can be found in tropical and sub-tropical areas around the world.

4. Strawberry guava and apple guava are invasive species of guava. They can easily conquer new habitats and eliminate native species of plants. 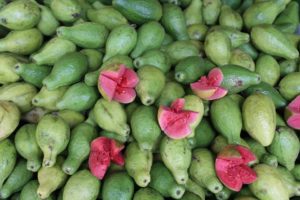 5. Several species of guava are endangered and Jamaica guava is already extinct due to habitat loss.

6. Guava grows in the form of evergreen shrub or a small tree. Cultivated varieties usually reach about 20 feet in height.

7. Guava has glossy, dark green leaves that are elliptical or oval in shape. The leaves are oppositely arranged on the branches.

8. They produce white flowers that appear individually or arranged in clusters. The flowers have many stamens and tiny pistils.

9. The fruit of guava is oval, round or pear-shaped. Ripe fruit is covered with yellowish, greenish or maroon skin. The flesh can be white, yellow, pink or red in color.

10. Guava starts to produce fruit about 2 to 8 years after planting. The fruit has a strong, lemon-like musky odor. The rind can be bitter or sweet, while the flesh has a creamy texture and sweet tart like taste. Under the optimal climate conditions, guava produces fruit 2 times per year. 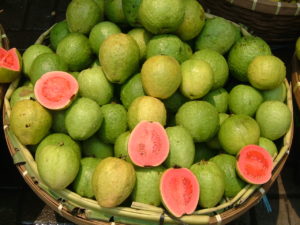 11. The fruit of guava contains 100 to 500 miniature seeds, located in the middle of the fruit. The seeds are edible, however, some varieties of guava are seedless.

12. Guava is a rich source of vitamins B, C, A, and E. It’s also a very good source of dietary fibers and minerals such as potassium, manganese, magnesium and phosphorus. Guava also has many phytochemicals that are very beneficial for peoples’ health.

13. Guava is often labeled as a “super fruit” because it has 4 times more vitamin C than an orange, 3 times more proteins and 4 times more fiber than a pineapple, 2 times more lycopene than a tomato and slightly more potassium than a banana.

14. It can be sliced and eaten raw, or in the form of smoothies, jellies, ice-creams, syrups, marmalades and jams. It can also be used as an ingredient of various alcoholic and non-alcoholic beverages.

15. Leaves of the guava are used as a source of black pigment in the textile industry. 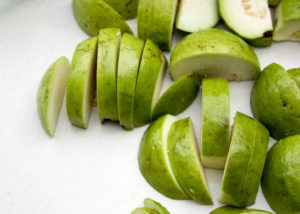 16. Sometimes, guava is used in the treatment of high blood pressure, constipation, respiratory disorders and hypercholesterolemia.

17. Tea made out of guava leaves is used to treat diarrhea, fever and dysentery.

18. Guava has smooth, rust colored bark that’s sometimes used in decorative purposes. The wood of a guava tree is used for smoking meat.

19. The term “guava” appears to comes from Arawak “guayabo” meaning “guava tree,” through the Spanish “guayaba”. It has been adapted in many European and Asian languages, having similar form.

20. Several species of guava are grown commercially; apple guava and its cultivars are those most commonly traded internationally.

21. Guavas also grow in southwestern Europe, specifically the Costa del Sol on Malaga, Spain and Greece where guavas have been commercially grown since the middle of the 20th century and they proliferate as cultivars. 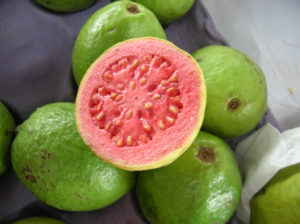 22. Guavas were introduced to Florida in the 19th century and are now grown in Florida as far north as Sarasota, Chipley, Waldo and Fort Pierce.

23. Since the 1950s, guavas, particularly the leaves, have been studied for their constituents, potential biological properties and history in folk medicine.

24. In El Salvador, the wood of a guava shrub is used to make hair combs.

25. Colombia has an ancient recipe using guava. The fruit is made into a paste and combined with cheese and eaten with Colombian bread.

26. At one point in Philippine mythology, the guava was forbidden. This changed when a child prayed to the gods to make the inedible fruit delicious so he could feed a beggar.