Durian is the fruit of several tree species belonging to the genus Durio. There are 30 recognized Durio species, at least nine of which produce edible fruit, and over 300 named varieties in Thailand, 102 in Indonesia, and 100 in Malaysia. Take a look below for 26 more fun and fascinating facts about Durian.

1. Durio zibethinus is the only species available in the international market. All the other species are sold in their local regions.

2. Regarded by many people in Southeast Asia as the “king of fruits,” the durian is distinctive for its large size, strong odor, and formidable thorn covered rind.

4. The fruit typically weighs 1 to 3 kilograms, or 2 to 7 pounds. Its shape ranges from oblong to round, the color of its husk from green to brown and its flesh from pale yellow to red, depending on the species. 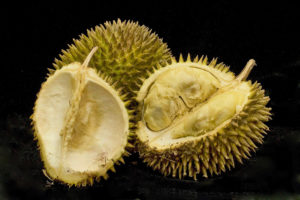 5. Some people think the durian has a pleasant and sweet fragrance, while others find the aroma overpowering with an unpleasant odor.

6. The smell from the durian evokes reactions from deep appreciation to intense disgust, and has been described variously as rotten onions, turpentine and raw sewage.

7. The persistence of durian’s odor, which may linger for several days, has led to the fruit being banned from certain hotels and public transportation in southeast Asia.

8. The flesh of the durian can be eaten at various stages of ripeness, and it’s used to flavor a wide variety of savory and sweet desserts in southeast Asian cuisines.

9. First used around 1588, the name “durian” comes from the Malay language word “duri”, meaning “spike”, a reference to the many prickly spikes of the rind.

10. Durian grows only in tropical climates. 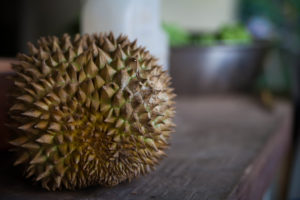 11. Thailand is the biggest producer of durian in the world.

12. Durian was introduced to the western society 600 years ago.

13. Despite being on the menu for centuries, durian is still one of the most mysterious and intriguing fruits because of its good taste and terrible smell.

14. Durian produces elliptical or oblong leaves that give out a pleasant aroma. The leaves are green colored and alternately arranged on the branches.

15. The plant produces white, yellow or reddish flowers arranged in clusters of 3 to 30. The flowers grow directly from the main branches and trunk. They are large and feathery and they produce large quantities of nectar, which attracts bats and bees, who are the main pollinators of the plant.

16. Durian can weigh up to 7 pounds and it can inflict serious injuries to the people passing under the tree when it falls to the ground. 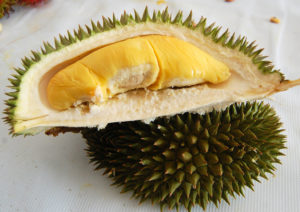 17. Durian starts to produce fruit 5 years after it has been planted. Ripe fruit is available from June to August. The tree can produce fruit two times per year, while older trees produce the best quality fruit.

18. The fruit is a rich source of dietary fibers, vitamin C, E, and vitamins of the B group and minerals such as iron and potassium. However, it should be consumed moderately because of its high sugar content.

19. It can be consumed fresh or as an ingredient in ice cream, cake, milkshakes and biscuits. It can also be used for the preparation of soups, sauces and curries.

20. Durian seeds need to be thermally processed, such as fried, boiled or roasted, before they can be eaten.

21. Thanks to its unusual smell, animals such as civet can easily detect durian from a distance of half a mile. 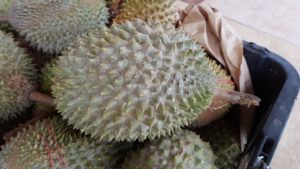 24. The earliest known European reference to the durian is the record of Niccolo Da Conti, who traveled to south-eastern Asia in the 15th century.

25. Since the early 1990s, the domestic and international demand for durian in the Association of Southeast Asian Nations region has increased significantly, partly due to the increasing affluence of Asia.

26. Southeast Asian traditional beliefs, as well as traditional Chinese medicine, consider the durian fruit to have warming properties liable to cause excessive sweating.