Bug is a fictional character and superhero that appears in American comic books published by Marvel Comics. Bug was originally a member of the Micronauts and later joined the second incarnation of the Guardians of the Galaxy. Take a look below for 26 more fun and interesting facts about Bug.

1. When Bug first appeared in Micronauts #1, he was known as Galactic Warrior, taking the name from a figure from the Micronauts toy line on which the comic book series was based.

2. Starting with the fourth issue of Micronauts, Galactic Warrior’s name was changed to Bug. This was done after Marvel realized that since the character’s design looked nothing like the toy, they could assume ownership if they used a different name.

3. Bug and the other Micronauts that Marvel owned guest starred in Cable #39 and Bug was featured in a solo one-shot.

4. Bug later appeared with other Marvel owned Micronauts, which were then named Microns, in issues of Captain Marvel in 2000 and 2001. 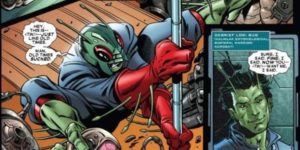 5. In 2007, Bug appeared alone, without any of the other Microns, as a prisoner of the alien race the Kree.

6. Bug was recruited into a hastily assembled covert team led by Star-Lord.

8. He was a recurring character in the second volume of Guardians of the Galaxy, which spun out of the events portrayed in Annihilation: Conquest.

9. Although Bug wasn’t a founding member of the modern Guardians team, Rocket Raccoon asked him to join when the original group disbanded after some internal misunderstandings.

10. Bug fought alongside the Guardians of the Galaxy as they attempted to stop the Shi’ar-Kree interstellar conflict known as the War of Kings. 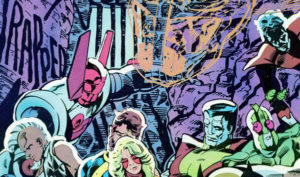 11. Bug stayed with the Guardians of the Galaxy as they dealt with the War of King’s aftermath in the Realm of Kings storyline through the series’ end.

12. He appeared as a member of the Guardians of the Galaxy in Avengers Assemble issues #4 to #8.

13. Bug can cling to walls and he has exceptional agility.

14. He has extraordinary sight, with enhanced peripheral vision gained by wearing his helmet.

15. His antennae enable communication with others bearing antennae, and provide heightened sensory awareness with a limited degree of danger sense.

16. In an interview for Guardians of the Galaxy, director and screenwriter James Gunn revealed that Bug was in a previous script for the movie as a part of the team.

17. Bug is a maser thief from the Insectivorid homeworld Kaliklak based in the Microverse.

18. He was a jokester and rogue by nature but always a professional when it came down to do a job.

20. Bug’s physical strength is sufficient to lift and throw objects as heavy as most standard cars with ease. He must also pull his punches and kicks unless fighting someone of similar or greater physical durability. Otherwise, his blows would prove fatal to most beings.

22. Similar to Spider-Man, Bug possesses a danger sense which alerts him to danger. This takes the form of a tingling sensation at the base of his skull. 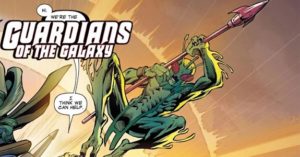 23. He occasionally uses a telepathically controlled glider-pac to enable flight.

24. His chosen weapon is a rocket lance, which can fire varying intensities of energy and can return to his hand if thrown.

25. Bug’s speech is interspersed with a “tik” sound due to an Insectivorid’s chitinous membrane in the throat. He also has an aversion to water.

26. His reflexes, in combination with his danger sense, allows him to dodge almost any attack, even direct gunfire, if he is far enough away.

10 Fascinating And Interesting Facts About GranKuwagamon From Digimon