Avocados are a fruit, which are botanically a large berry containing a single seed. It’s native to South Central Mexico but they’re commercially valuable and are cultivated in tropical and Mediterranean climates throughout the world. Take a look below for 26 more awesome and interesting facts about avocados.

1. There are over 500 varieties of avocados in the world.

2. They’re eaten by giant ground sloths and were saved from extinction by humans.

3. Avocados contain more fat than any other fruit or vegetable. The tree contains enzymes that prevent the fruit from ever ripening on the tree, which allows farmers to use the trees as storage devices for up to 7 months after they reach full maturity, allowing avocados to always be in season.

4. Avocados, pumpkins, watermelons and bananas are all berries, while strawberries, raspberries and blackberries aren’t. 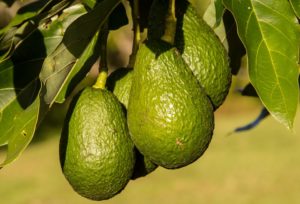 6. The avocado evolved to appeal to extinct megafauna, such as the giant armadillo, in order to facilitate seed dispersal through ingestion and excretion. This is why the avocado has such as a massive seed.

7. Jason Mraz moved onto a farm, found hundreds of Avocado trees on it, and now supplies Chipotle with avocados while eating 2 to 3 per day himself.

8. 95% of commercially grown avocados come from trees descended from a single tree owned by a California mail carrier.

10. They used to be called “alligator pears,” because of their green color and the fact that they’re shaped like a pear.

11. Avocados are poisonous to birds, cats, dogs, rabbits and almost all other pets.

14. It takes 1 gallon of water to grow a single almond and 220 gallons to grow an avocado. 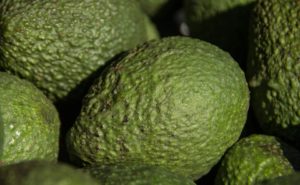 15. The word “avocado” means “testicle” because of its shape.

16. Sushi was introduced to the United State by Ichiro Mashita in Los Angeles in the late 1960s. After substituting avocado for tuna, he is credited with creating the “California Roll.”

17. The health benefits of avocado include weight management, protection from cardiovascular diseases and diabetes, treating osteoarthritis and enhancing the absorption of nutrients for the body. It also reduces the risk of cancer, liver damage and vitamin K deficiency related bleeding.

18. In the Philippines, Brazil, Indonesia, Vietnam and southern India, avocados are often used for milkshakes and occasionally added to ice cream and other desserts.

19. The oldest evidence of avocado use was found in a cave located in Coxcatlan, Puebla, Mexico, that dates to around 10,000 B.C. The avocado tree also has a long history of cultivation in Central and South America, likely beginning as early as 5,000 B.C. A water jar shaped like an avocado, dating to 900 A.D., was discovered in the pre-Incan city of Chan Chan.

20. According to the Guinness World Records, the world’s heaviest avocado is an avocado grown by Gabriel Ramirez Nahim of Venezuela. The avocado weighed 2.19 kilograms, or 4.83 pounds.

21. Only 4 major fruits and nuts were successfully domesticated in the 20th century. The United States Department of Agriculture was responsible for 3 of them: avocados, macadamia nuts, and blueberries. New Zealand got the fourth, which was the kiwifruit. 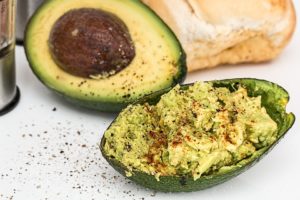 22. Avocados are a good source of glutathione, which is a powerful antioxidant critical for a healthy immune system.

23. The size of an avocado is equal to the size of a 16 week old baby inside a womb.

24. Avocados are rich in protein. They’re one of the only fruits that have high protein content. They also have all 18 important amino acids that are required for the protein building process in the human body.

25. They have high fiber content. They contain both soluble and insoluble fiber, both of which are needed by our body for proper digestion and to keep us free from gastrointestinal diseases.