Green Arrow is a fictional superhero who appears in comic books published by DC Comics. He was created by Mortimer Weisinger and designed by George Papp. His real name is Oliver Jonas Queen and he’s a wealthy businessman and owner of Queen Industries. Take a look below for 26 more amazing and interesting facts about the Green Arrow.

1. Green Arrow became a master martial artist after training for several months with some of the finest martial artists, including Deathstroke’s trainer, Natas.

2. He has mini cameras in his arrows to see who uses them and where they’ve been used.

3. He has the willpower to resist a Black Lantern ring.

4. Just like Captain America can ricochet his shield, Green Arrow knows how to ricochet arrows.

5. He bankrolled the original Justice League of America, but wasn’t a member. 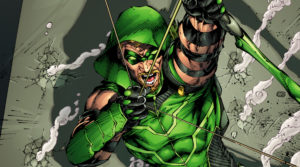 7. In Green Lantern Rebirth, Sinestro states that he hates Green Arrow because he wears the color of willpower.

8. He often refers to Superman and Batman as the “Hitler Twins.”

9. He once shot an arrow and hit a drop of water coming out of a faucet.

10. Green Arrow makes the hottest chili known to man in the DC Universe. It’s supposedly so hot that even Superman struggles to eat it. Batman is the only person who has been able to eat it without crying.

11. Green Arrow once shot two arrows down two different gun barrels, upside down in mid-flip, while somersaulting off a building.

12. In the Injustice storyline, Green Arrow dies when Superman discovers him in the fortress of solitude. His death inspires the Insurgency to push back harder, after which, he’s considered not a hero, but a legend.

13. Some of the Justice League members think that Green Arrow is a meta human because of how accurate his shots are. 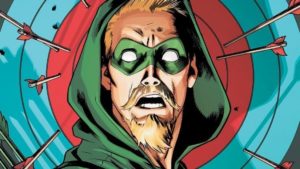 15. Oliver Queen was first introduced into the DC Universe in issue number 73 of More Fun Comics because publishers were nervous about relying too heavily on Batman and Superman in their comics. With Batman being such a successful and popular character, the publishers wanted a hero that was close enough to Batman in order to give the readers the same sense of adventure, but also giving the Dark KNight some time out of the spotlight.

16. Green Arrow made the ultimate sacrifice to save Metropolis during the events of the 1994 miniseries Zero Hour, and became a martyr. In order to carry on his father’s legacy and continue protecting the everyman, Connor Hawke took on the mantle of the Green Arrow. Although his time was short lived, Connor left his mark on the Green Arrow persona.

17. The most important quality that makes Green Arrow who he is, is his love for protecting the little man. Green Arrow’s crusade is all about protecting those who can’t protect themselves. Despite being a billionaire, Green Arrow has always stood up for the underprivileged and fought desperately against the corruption of a system that wrongs its citizens.

18. Oliver was very reluctant on joining the Justice League team and didn’t believe that the League was the right place for him. He felt like the League’s involvement in world threatening conflicts made them overlook the everyday victims of street level crime.

19. Batman refused to believe that Oliver Queen was really who he claimed to be. Batman insisted on proof before he would accept that his old friend had really returned from the dead. Batman kidnapped Green Arrow and took him to the Batcave to run a battery of tests while he was still unconscious. 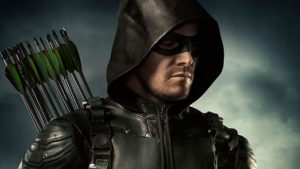 20. Green Arrow once hit the safety of a pistol and also hit an almost invisible wire from only a few meters away.

21. He once held his 103 pound draw bow for half an hour after he had a couple of liters of blood taken from him.

22. Oliver once contemplated about giving up his civilian life in favor of simply being the Green Arrow full time.

23. Harley Quinn used to have a crush on Green Arrow.

24. Like Batman, Green Arrow actually has many different gadgets that he uses. Many are trick arrows, but he has had other gadgets as well, such as the Arrowcar and the Arrowplane.

25. Even after his left arm was ripped off by Superman, Green Arrow still proved to be an effect archer by using his teeth. Though it wasn’t permanent as he later acquired a cybernetic arm from Batman.

26. As a child, Oliver Queen was a big fan of Robin Hood and idolized him. He also had the innate skill of archery. His 5 year stay on the island helped him hone his true skill.