Imhotep was an Egyptian chancellor to the pharaoh Djoser, probably architect of the step pyramid, and high priest of the Sun god Ra at Heliopolis. Very little is known of Imhotep as a historical figure, but in the 3000 years following his death, he was gradually glorified and deified. Take a look below for 25 more interesting and bizarre facts about Imhotep.

1. Today, outside the Egyptological community, he’s referred to as a polymath, poet, judge, engineer, magician, scribe, astronomer, astrologer and a physician.

2. No text from his lifetime mentions these capacities and no text mentions his name in the first 1200 years following his death.

3. Apart from the three short contemporary inscriptions that establish him as chancellor to the pharaoh, the first text to reference Imhotep dates to the time of Amenhotep III.

4. The first references to the healing abilities of Imhotep occur from the Thirtieth Dynasty onwards, some 2200 years after his death. 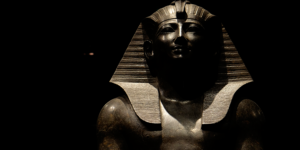 5. He was one of only two commoners ever to be deified after death, the other being Amenhotep, son of Hapu.

6. The center of his cult was in Memphis.

7. The location of Imhotep’s self-built tomb was well hidden from the beginning and it remains unknown, despite efforts to find it. The consensus is that it’s hidden somewhere at Saqqara.

8. Imhotep, or “he who cometh in peace,” was born in Ankhtowe, a suburb of Memphis, Egypt.

9. The month and day of his birth are noted precisely as the sixteenth day of Epiphi, third month of the Egyptian harvest, but the year isn’t recorded.

10. It’s known that Imhotep was a contemporary of the Pharaoh, or the King of Egypt, Zoser of the Third Dynasty. However, estimates of the era of his reign vary by as much as three hundred years, falling between 2980 and 2600 BCE. 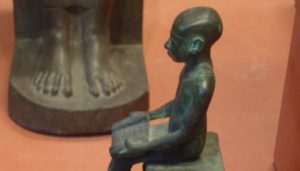 11. Imhotep’s father, Kanofer, a celebrated architect, was later known to be the first of a long line of master builders who contributed to Egyptian works through the reign of King Darius the First.

12. His mother, Khreduonkh, who probably came from the province of Mendes, is known today for having been deified alongside her son, which is an Egyptian custom.

13. As vizier, Imhotep was chief advisor to Zoser in both religious and practical matters, and he controlled the departments of the Judiciary, Treasury, War, Agriculture and the General Executive.

14. There are no historical records of Imhotep’s acts as a political figure, but his wisdom as a religious advisor was widely recognized after he ended a terrible famine that dominated Egypt during the seven years of Zoser’s reign.

15. Imhotep was one of the chief officials of the Pharaoh Djoser.

16. Egyptologists ascribe to him the design of the Pyramid of Djoser, a step pyramid at Saqqara in Egypt in 2630 BCE. 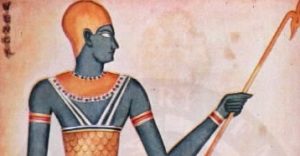 17. He may also have been responsible for the first known use of stone columns to support a building.

18. Despite these later attestations, the pharaonic Egyptians themselves never credited Imhotep as the designer of the stepped pyramid nor with the invention of stone architecture.

19. Two thousand years after his death, Imhotep’s status had risen to that of a god of medicine and healing.

20. He was eventually equated with Thoth, the god of architecture, mathematics and medicine, and patron of scribes. Imhotep’s cult had merged with that of his former tutelary god.

21. He was revered in the region of Thebes as the “brother” of Amenhotep, son of Hapu, another deified architect, in the temples dedicated to Thoth.

22. Imhotep was linked to Asklepios by the Greeks. 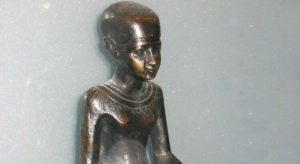 23. As an instigator of the Egyptian culture, Imhotep’s idealized image lasted well into the Roman period.

24. In the Ptolemaic period, the Egyptian priest and historian Manetho credited him with inventing the method of a stone-dressed building during Djoser’s reign, though he was not the first to actually build with stone.

25. Egyptologist James Peter Allen stated that, “The Greeks equated him with their own god of medicine, Asklepios, although ironically there is no evidence that Imhotep himself was a physician.”