Ibex goats are wild goats that live in mountainous regions of Europe, north central Asia and northern Africa. There are 5 mains species of ibex. They’re known for their long, curved horns and cloven hooves. Male ibex goats are also known for having long beards. Ibex goats are related to antelopes, buffalo, bison, cattle, goats and sheep. Take a look below for 25 more fun and interesting facts about itex goats.

1. Ibex goats grow between 1 and 5.5 feet, or 30 and 170 centimeters, from their hooves to their withers, which is the highest part of their shoulder at the base of their neck. On average, they weigh between 65 and 265 pounds, or 30 and 120 kilograms.

2. Male and female ibex have long horns, which they use to defend their territory and for sexual selection.

3. Their horns curve backwards, which forms a semicircle. They have knobby rings on the outer curve. Male ibex have horns that can reach up to 5 feet, or 1.5 meters, in length.

4. They’re herbivores, which means that their diet is primarily plant based. Their diet consists of shrubs, bushes and grasses.

5. Due to the low nutritional value of their diet, they spend the majority of their time grazing and looking for food.

6. They inhabit massive cliffs that would be dangerous for most predators.

8. Nubian ibex have shiny coats that reflect sunlight and keep them cool, which is especially important in the hot, dry climates of the African and Arabian mountains.

9. They’re social creatures and like to live in groups called herds. However, the herds are segregated by gender, with males having one herd and the females and offspring being in another herd. The two herds will often meet during breeding season.

10. The male herd is called a bachelor herd. Some male ibex will wander without a herd.

11. Male ibex use their scent to communicate with potential mates. The Nubian ibex males will use their beards to spread a scent that draws in and excited female ibex during breeding season.

12. The breeding season for ibex is called the rut. During the rut, male ibex will fight for their right to breed with the females by pushing their heads together. The winner of the rut can then court the female through a process that takes about 30 minutes.

13. When the females are pregnant, they go through a gestation period of between 147 and 180 days. She will give birth to 1 to 3 offspring, called “kids,” at a time.

14. As soon as they’re born, the kids are alert and can jump around. After 4 weeks, they’re ready to join others kids in the group. After 4 to 6 months, they’re weaned and remain with their mother for a year. 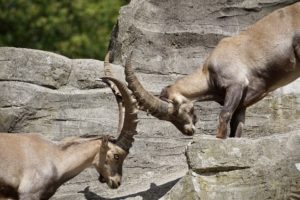 16. The Nubian ibex is considered vulnerable by the International Union for Conservation of Nature. It’s estimated that there are fewer than 10,000 mature individuals.

17. According to the IUCN, the Walia ibex is endangered, with only about 500 of their species left.

18. The Pyrenean ibex was declared extinct in 2000, however, in 2009, Spanish biologists used frozen tissue to clone a Pyrenean ibex. The clone lived for 7 minutes, but scientists are hopeful that this cloned ibex will help in the successful cloning of other extinct animals.

19. Ibex are known to jump more than 6 feet, or 1.8 meters, straight up without a running start. This is what helps them climb mountains with ease.

20. Their hooves have sharp edges and concave undersides that act like suction cups that help them grip the sides of steep, rocky cliffs.

21. The Alpine ibex can climb up the side of the Cingino Dam in the Italian Alps to lick salt and lichens from the stones using its impressive hooves.

22. Humans have hunted the ibex for thousands of years. They have provided people with meat for food and hide for clothing. 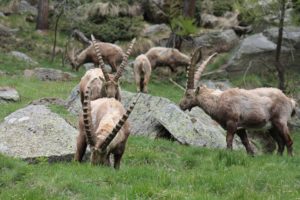 24. The Siberian ibex is the largest member of the genus Capra. They are stout and thick, with short necks and large rib cages.

25. Ibex were depicted in Ice Age paintings and immortalized as the zodiac sign Capricorn. Folk remedies made from ibex horn and organs were some of the most sought after items in medieval pharmacies.