Guanacos are members of the camel family. Their closest relatives are camels, llamas and alpacas. They can be found all over South America, in places such as Argentina, Chile, Peru, Paraguay, Bolivia and Ecuador. Guanacos tend to inhabit savannas, shrublands, grasslands, deserts, forests and rocky areas. Take a look below for 25 more fun and fascinating facts about guanacos.

1. Their body is covered with a thick and wooly coat. Their coat is usually light brown or reddish brown in color. Their coat color provides camouflage against predators, since it matches the color of their environment.

2. Guanacos are medium sized animals. They can reach a height of 3.5 to 4 feet and they can weigh up to 300 pounds.

3. They have large heads with pointed ears, long necks, long legs and short tails. The position of their tail, whether it’s pointing up or down, lets the other members of the group know about upcoming danger. It’s also used as a sign of aggression during fights.

4. They’re herbivores, which means that their diet consists of plants.

5. Since they live in windy environments, they have thick eyelashes that protect their eyes from dust and dirt. They also have padded feet that allow for easy movement across gravel.

6. They’re fast animals and can reach reach speeds of up to 35 miles per hour when they run. They’re also pretty good swimmers, which is essential for their survival as some of their predators can’t swim. 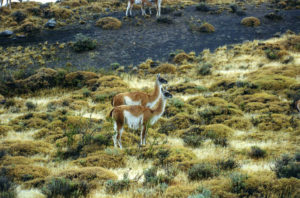 7. Similar to llamas, guanacos are know to spit. They will usually spit at someone if they are irritated or annoyed with them.

8. They have 4 times more red blood cells than humans because they live in high altitudes with low levels of oxygen in the air.

9. They communicate using different sounds. They’re known to make high pitched sounds, snorts and shrieks when they’re warning other members of their group about potential danger. They also use feces for marking their territory.

10. Guanacos form family groups that are usually composed of 10 animals, including one dominant male, a few females and their offspring. Young males are known to live in large bachelor herds of up to 50 members.

11. When they’re 5 years old, young males will fight for dominance and the chance to create their own herd. During the fight, male guanacos will usually bite the front legs of their opponents.

12. Their mating season lasts from November to February, which are the summer months in South America.

13. Female guanacos remain pregnant for 11 months and will deliver one offspring, which is called a “chulengo.” The offspring is able to walk from the moment it’s born.

14. They can live between 15 to 20 years in the wild, and up to 26 years in captivity due to better living conditions.

15. Even though they’re still considered to be wild, there are around 300 guanacos in United States zoos and around 200 that are registered with private herds.

16. Guanaco fiber is prized for its soft, warm feel and is often found in luxury fabric. 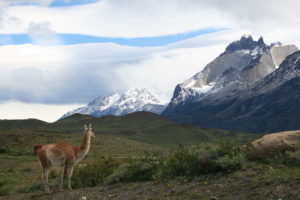 17. Their soft will is valued second only to that of the vicuna. Their pelts, particularly from the calves, are usually used as substitutes for red fox pelts because it’s very difficult to tell the texture apart.

18. Like the llama, they have double coated coarse guard hairs and a soft undercoat. Their hairs are comparable to some of the best cashmere in the world.

19. Some guanacos live in the Atacama Desert, where it hasn’t rained in the past 50 years. The mountainous coastline that’s parallel to the desert allows them to survive the fog oases that occur often.

20. Guanacos have a thick skin on its neck, which is also a trait found in llamas and alpacas, that protects their neck from predator attacks.

21. Bolivians use the guanacos neck skin to make shoes, flattening and pounding the skin to be used for the soles. 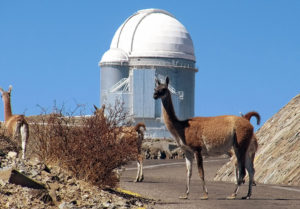 24. Several native groups in the Andes and southern parts of South America used to consider guanacos as their prime source of protein.

25. Guanacos are one of the most adaptable animals when it comes to climate conditions and shelter requirements.