Limes are a hybrid citrus fruit, which are typically round, lime green, 3 to 6 centimeters, or 1.2 to 2.4 inches, in diameter and contain acidic juice vesicles. Take a look below for 25 more fun and interesting facts about lime.

1. There are several species of citrus trees whose fruits are called limes, including the Key lime, Persian lime, kaffir lime, and desert lime.

2. Limes are a rich source of vitamin C and are often used to accent the flavors of foods and beverages.

3. Even though the precise origin of limes is uncertain, wild limes are believed to have first grown in Indonesia or Southeast Asia, and then were transported to the Mediterranean region and north Africa around 1000 CE.

4. To prevent scurvy during the 19th century, British sailors were issued a daily allowance of citrus, such as lemon, and later switched to lime. 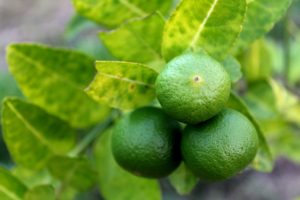 5. The use of citrus from lime was initially a closely guarded military secret, as scurvy was a common scourge of various national navies, and the ability to remain at sea for lengthy periods without contracting the disorder was a huge benefit for the military.

6. British sailors acquired the nickname, “Limey” because of their usage of limes.

8. West Indian lime, Persian lime, sweet lime and desert lime are some of the most popular types of lime that differ in size, color and flavor.

9. Lime can be used as a substitute for lemon because the two fruits both have a sour taste and similar vitamin content.

10. Lime is a small tree that usually grows up to 16 feet in height. 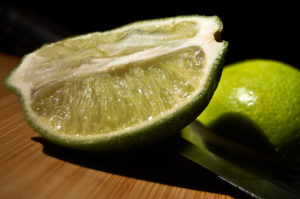 11. Lime trees have a shrub-like appearance due to multiple, irregular branches with numerous short twigs. Some types of lime are spiny.

12. It has ovate leaves with entire margins. The leaves are glossy, light or dark green colored and they’re alternately arranged on the branches.

13. They produce small, star-shaped, white or yellow flowers. The flowers are often arranged in clusters and are very fragrant.

14. Lime blooms and produces fruit all year round. In the northern hemisphere, lime produces the greatest quantity of lowers and fruit from May to September.

15. Lime is oval or globular shaped. It has a small nipple on top of it and the fully ripe fruit is yellowish green colored.

16. The fruit is covered with a thin peel. Transparent membranes divide the greenish flesh into segments. Each segment has hundreds of miniature sacs filled with juice. The fruit continues to ripen after the harvest. 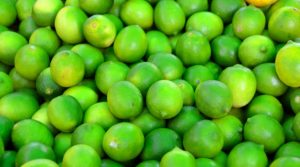 17. Lime is a rich source of dietary fibers and vitamin C, however, it has 4 times less vitamin C than lemon.

18. Essential oils extracts from lime have application in the cosmetic industry for the production of fragrances. Citrus rich aroma, typical for lime, is popular and often used in the manufacture of cleansing products and in aromatherapy.

19. Limes have a higher content of sugars and acids than lemons do.

20. Lime pickles are an integral part of Indian cuisine. South Indian cuisine is heavily based on lime; having either lemon pickle or lime pickle is considered an essential of Onam Sadhya.

21. The use of dried limes, called black lime or loomi, as a flavoring is typical of Persian cuisine and Iraqi cuisine, as well as in Persian Gulf style baharat.

22. Lime is a common ingredient in authentic Mexican, Vietnamese and Thai dishes. 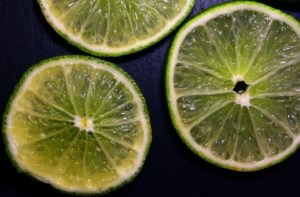 23. Lime soup is a traditional dish from the Mexican state of Yucatan.

25. When human skin is exposed to ultraviolet light after contact with lime peel or juice, a reaction known as phytophotodermatitis can occur, which can cause darkening of the skin, swelling or blistering.