2. The current Black Tarantula is the leader of the Argentinian Crime Syndicate.

3. Each Black Tarantula supposedly separates the male heir from the mother at an early age to begin a life of vigorous training. 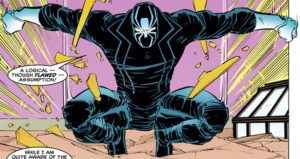 5. Black Tarantula once defeated Spider-Man, but let him live.

6. Black Tarantula was incarcerated in the United States and kept depowered in Rykers Prison along with Daredevil, the Kingpin, Hammerhead and the Punisher. At the prison, he was nearly killed by Bullseye.

7. When he is released from prison, he’s killed by Lady Bullseye and resurrected as an assassin for the Hand.

8. He’s seen in Shadowland alongside Daredevil. However, in Daredevil #510, he’s seen rescuing Dakota North and Foggy Nelson from an attack by Hand ninjas.

9. In the alternate future MC2, Fabian LaMuerto, the son of the current Black Tarantula has taken up his father’s mantle.

10. In MC2, Black Tarantula is still a criminal though he has a deep sense of honor, and has helped support Spider-Girl’s crime fighting career.

12. He can exert himself at peak capacity for at least 24 hours.

13. Black Tarantula possesses durability far beyond that of a normal human. He can withstand great impacts, such as falling from a height of several stories or being struck by an opponent with super strength.

14. His skin is highly durable, to the point that he’s nearly bullet-proof.

15. His balance, coordination, agility and dexterity is beyond the physical limits of the finest human acrobats. His agility is on par with someone like Spider-Man. 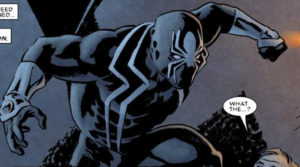 17. His eyes can project powerful concussive blasts of energy, but require several minutes between uses to restore the charge.

19. Black Tarantula claims that he is immortal, though this was never proven in the comics. Nevertheless, he does live way much longer than an average human.

20. He possesses a brilliant criminal mind, and is a strategist, planner and tactician of the highest order.

21. He’s a master of many forms of both armed and unarmed combat, capable of holding his own against other skilled hand to hand fighters such as Daredevil. 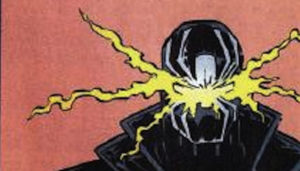 22. Black Tarantula’s origins are clouded with mysteries and missed information. It’s said that centuries ago, he used to be a European explorer who traveled to Japan and was trained by the Ninja Clan, The Hand. When his training was over, he was given a potion that gave him superhuman abilities and immortality.

23. Some Black Tarantula origin stories state that Black Tarantula’s immortality doesn’t come from a special potion but is passed down from father to son.

24. In MC2, Fabian wears a variation of his father’s suit, removing the sleeves and using futuristic metal gauntlets and boot soles.