The Beyonder is a fictional cosmic entity appearing in American comic books published by Marvel Comics. He was created by writer Jim Shooter and artist Mike Zeck. The character first appeared in Secret Wars #1 as an unseen, nearly omnipotent being who kidnapped the heroes and villains of the Marvel Universe and had them do battle on another planet called Battleworld. Take a look below for 24 more interesting and weird facts about the Beyonder.

1. The character appeared in a more antagonistic role in the 1985 sequel Secret Wars II, in which he took human form, and threatened to destroy the Marvel multiverse.

2. In Secret Wars #3, the Beyonder took on the permanent form in which he remained for the rest of his existence, that of a Caucasian human male with curly black hair.

3. Even though he was killed at the end of Secret Wars II, he has appeared multiple times in stories well into the 2000s, but in a very diminished form. 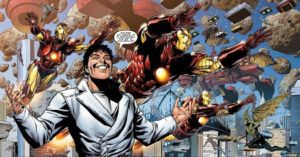 4. The Beyonder is the sum total of an entire multiverse, called the Beyond-Realm or simply Beyond, which is why his name is the Beyonder.

5. The dimension where the Beyonder comes from was originally believed to be accidentally accessed by lab technician Owen Reece.

6. Part of the Beyonder’s universe escapes and imbues Reece with near infinite powers, which he uses as the villainous Molecule Man, who is one of the most powerful villains in the Marvel Universe.

7. The part of the dimension that doesn’t go into Reece gains sentience and curiosity, becoming the Beyonder.

8. The Beyonder creates a planet called Battleworld out of pieces of various planets, and abducts many superheroes and supervillains from Earth, forcing them to fight against one another.

9. His powers were once stolen by Doctor Doom. 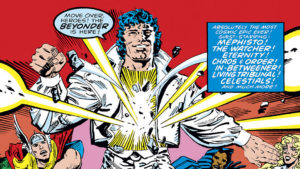 10. In Secret Wars II, the Beyonder creates a form for himself based on that of Captain America after seeing him defeat Armadillo.

11. After finding out how important money is from Luke Cage, the Beyonder turns a building into pure gold, causing Spider-Man to rescue those trapped in the building while the U.S. government tries to get rid of the gold to avoid a financial crisis.

12. After being encouraged to find enlightenment by Doctor Strange, and failing, a frustrated Beyonder decides to destroy the entire multiverse, leading to several more battles with various Marvel superheroes, all of which end up failing to take down the Beyonder.

14. The Beyonder is an infinite-dimensional being, and was originally portrayed as the most powerful being in the Marvel Universe, and as the be-all and end-all of the Beyond Realm, that took human form to better understand the nature of human beings. 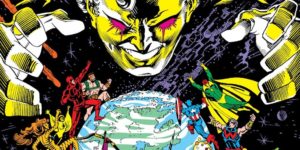 15. He possessed power that was millions of times greater than the entire multiverse combined, and that a regular universe was as a drop of water in the ocean compared to the Beyond Realm.

16. The Beyonder was capable of destroying, and recreating, the abstract entity known as Death across the multiverse, although it exerted and weakened him to do so.

18. The Beyonder once repelled Galactus like a bug and exceeded the collected energy of his World-Ship.

19. He once destroyed a galaxy on a whim to meet his needs during the first Secret Wars, and later created a universe out of his own being.

20. When Molecule Man extracted the Beyonder from Kosmos, their battle took place in more than three spatial dimensions, and threatened to cause vast destruction across the multiverse.

21. The Beyonder’s scale of power was stated to be significantly below that of the Living Tribunal and Eternity, the Celestials, or Molecule Man, when he is unfettered from his emotional weaknesses. 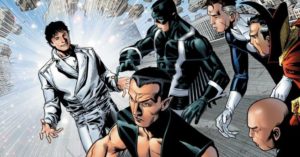 22. In the Earth-691 timelines that’s seen in Guardians of the Galaxy, the Beyonder gives Guardian Vance Astro a black undergarment resembling a Symbiote.

23. In the alternate Earth of Mutant X, the Beyonder allies with Dracula to wage war on Earth’s forces and to confront the entity known as the Goblyn Queen.

24. It was revealed in Secret Wars Official Guide to the Marvel Multiverse that in the distant past, the enigmatic Beyonders created pocket universes holding vast amounts of sentient energy, possibly as incubator units for their young.