Raisins are dried grapes. They are produced in many regions of the world and can be eaten raw or used in cooking, baking and brewing. In the United Kingdom, Ireland, New Zealand and Australia, the word “raisin” is reserved for the dark-colored dried large grape, with “sultana” being a golden-colored dried grape, and “currant” being a dried small Black Corinth seedless grape. Take a look below for 24 more fun and interesting facts about raisins.

1. The word “raisin” dates back to Middle English and is a loanword from Old French. In modern French, raisin means “grape”, while a dried grape is a raisin sec, or “dry grape.”

2. Raisin varieties depend on the type of grape used, and are made in a variety of sizes and colors, including green, black, brown, blue, purple and yellow.

3. Seedless varieties of raisins include the sultana, the Greek currants and Flame grapes.

4. Raisins are traditionally sun-dried, but may also be water-dipped and artificially dehydrated. 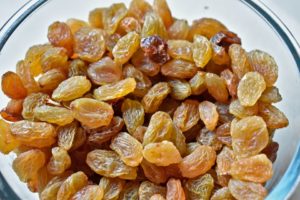 5. “Golden raisins” are treated with sulfur dioxide after drying to give them their golden color.

6. Black Corinth or Zante currant are miniature, sometimes seedless raisins that are much darker and have a tart, tangy flavor. They are often called currants.

7. Muscat raisins are big compared to other varieties, and they’re also sweeter.

8. Several types of raisins produced in Asia are available in the West only at ethnic grocers. For example, monukka grapes can only be found at specialty stores.

9. Global raisin production in 2016 was 1.2 million metric tons, with the United States as the top producer, contributing 24% of the global harvest.

10. Half of the world’s supply of raisins are grown in California. 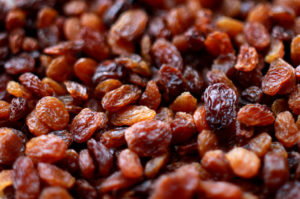 11. California discovered the commercial potential of raisins by accident. In 1873, a freak hot spell withered the grapes on the vines and one enterprising San Francisco grocer advertised these shriveled grapes as “Peruvian Delicacies” which is what attracted so much attention.

12. It takes more than 4 tons of grapes to produce 1 ton of raisins.

13. The California Dancing Raisin was introduced in 1984 by the California Raisin Industry marketing staff to increase awareness and demand for California raisins.

14. It’s believed that humans discovered raisins when they happened upon grapes drying on a vine. History books note that raisins were sun-dried from grapes as long ago as 1490 BC.

15. Crusader knights first introduced raisins to Europe when they returned home from the Mediterranean. Packing and shipping techniques were good enough to ship raisins throughout northern Europe.

16. In the 14th century, raisins became an important part of European cuisine. Spaniards perfected viticulture, or grape growing, and Roman physicians prescribed raisins to cure anything from mushroom poisoning to old age. 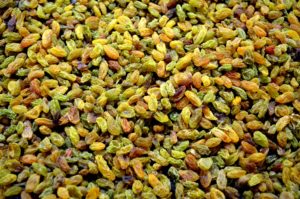 17. In the 18th century, Spanish missionaries in Mexico moved into California and helped the farmers grow grapes for wine.

18. In 1876, Scottish immigrant William Thompson grew a seedless grape variety that was thin-skinned, seedless, sweet and tasty. Today, 95% of California raisins are made from Thompson seedless grapes.

19. In the late 1800s, Armenians descended from the first founders of vineyards in Persia began settling in the San Joaquin Valley. The area now supplies raisins for nearly half the world, making it the largest producer anywhere.

20. The best raisins are considered to come from Malaga in Spain.

21. Raisins can contain up to 72% sugars by weight, most of which is fructose and glucose. They also contain about 3% protein and 3.7% to 6.8% dietary fiber.

22. Raisins, like prunes and apricots, are also high in certain antioxidants, but have a lower vitamin C content than fresh grapes. 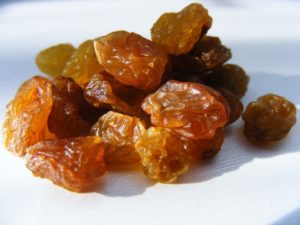 23. Raisins are low in sodium and have almost no cholesterol.

24. Data presented at the American College of Cardiology’s 61st Annual Scientific Session in 2012 suggest that, among individuals with mild increases in blood pressure, the routine consumption of raisins may significantly lower blood pressure, especially when compared to eating other common snacks.