Bushwacker, or Carl Burbank, is a fictional character and supervillain that appears in American comic books published by Marvel Comics. He’s primarily an enemy of Daredevil, though he often fights with the Punisher and Wolverine as well. Take a look below for 24 more fun and fascinating facts about Bushwacker.

1. Bushwacker was created by Ann Nocenti and Rick Leonardi. He made his first appearance in Daredevil #248.

2. Carl Burbank was originally a Catholic priest but abandoned his vows following the drug-related deaths of young parishioners.

3. He joined the C.I.A., which outfitted him with a cybernetic arm and made him an assassin under the codename Bushwacker, but ultimately, he became a freelancer.

4. Bushwacker took advantage of the mutant hysteria and used it to get work as people would pay top dollar to kill a mutant. 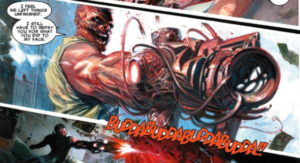 5. Bushwacker joined with Typhoid Mary and other Daredevil enemies in a plan to defeat him. After the completion of the plan, Mary took Daredevil’s body and Bushwacker was left to his fend for his own.

6. Entering the Kingpin’s employ, Burbank attacked the Punisher but was left for dead. It was during this time that his wife finally left him.

7. Architect offered a lot of money to the first assassin that could kill him. During the job, Burbank faced off against Boomerang but was interrupted by Elektra who deflected Boomerang’s razorang and it ended up severing Bushwacker’s prosethic arm.

8. Bushwacker was once hired by the Kingpin to cooperate with assassin Bullseye, ninja organization The Hand and Kingpin himself to capture a Russian ship loaded with weapons that could start a war, however, Daredevil stopped them.

9. Imprisoned in the Raft, Burbank escaped during the mass breakout engineered by Electro.

10. Jackal hired Bushwacker to kill the Punisher but he ended up being defeated by the Daredevil once again.

11. Bushwacker joined the Hood’s criminal army, which was created to take advantage of the chaos caused by the Superhuman Registration Act.

12. Bushwacker was active with Hood’s group during the Secret Invasion of the Skrulls, where they worked with the heroes to defeat the alien army.

13. Burbank took part in the Siege of Asgard as part of the Hood’s criminal army.

14. Burbank was hired by the Assassins Guild to track down the money Domino stole and then kill her, however, Wolverine cut off his arm and then stabbed him in the throat.

15. At one point, Bushwacker was imprisoned by S.H.I.E.L.D. in Pleasant Hill, a prison in the form of a small town where its inmates had their memories and appearances tampered with using a sentient Cosmic Cube called Kobik.

16. Burbank’s limbs have been replaced with advanced cybernetic components, granting him superhuman strength of an unrevealed limit. 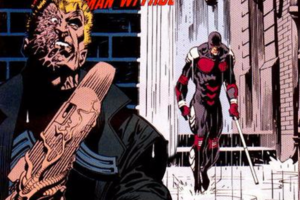 17. His body is considerably more resistant to physical injury than that of an ordinary human. His skin has been replaced with an artificial type of plastic that looks identical to human skin but is much more durable.

18. His skin is composed of malleable plastic that appears human, but can stretch into a variety of shapes around his transformable musculature.

19. Burbank’s cybernetic arms conceal a variety of firearms. He prefers to transform only his right arm, but has occasionally changed his left too when circumstances dictated the need.

22. It’s not known where Bushwacker stores his ammunition, but in Machine Gun Mode, he ejects spent casting rather than retaining them. 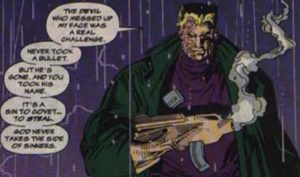 23. Bushwacker is a trained cover operative with skills in assassination and espionage.

24. Bushwacker, at one point, asserted to Daredevil that he had made the ironic discovery that he was a mutant himself, and that the C.I.A. hadn’t altered his physiology in any way outside of activating his dormant X-Gene. This revelation instilled in Burbank the new belief that he was born to kill.