Rambutan is a medium sized tropical tree in the family Sapindaceae; the name also refers to the edible fruit produced by this tree. Rambutan is native to the Malay-Indonesian region, and other regions of tropical Southeast Asia. Take a look below for 24 more fun and interesting facts about rambutan.

1. Rambutan is closely related to several other edible tropical fruits including the lychee, longan and mamoncillo.

2. The name “rambutan” comes from the Malay-Indonesian languages word for “rambut” or “hair”, a reference to the many hairy protuberances of the fruit.

3. In Vietnam, rambutan is called “chom chom”, which means “messy hair”, due to the spines covering the fruit’s skin.

4. Native to tropical Southeast Asia, rambutan is commonly grown in various countries throughout the region. 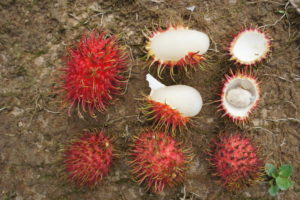 5. Rambutan has spread from Southeast Asia to other parts of Asia, Africa, Oceania and Central America.

6. Around the 13th and 15th centuries, Arab traders, who played a major roles in Indian Ocean trade, introduced rambutan into Zanzibar and Pemba of East Africa.

7. In the 19th century, the Dutch introduced rambutan from their colony in Southeast Asia to Suriname in South America.

8. There was an attempt to introduce rambutan to the southeastern United States, with seeds imported from Java in 1906, but the species proved to be unsuccessful, except in Puerto Rico.

9. Rambutan grows on the well drained, fertile, loamy or sandy soils, on the altitude of 1,600 feet.

10. There are more than 200 varieties of rambutan today, but only few are cultivated and used for consumption. 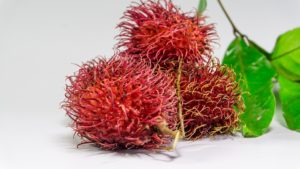 12. It has pinnate leaves composed of 3 to 11 oval leaflets with smooth edges and pointed tips. The leaves are dark green colored and alternately arranged on the branches.

13. Rambutan produces small, disk-shaped, petal-less flowers arranged in the multi-branched, erect clusters at the end of the branches.

14. Depending on the cultivar, rambutan produces either functionally male, functionally female or hermaphroditic flowers.

15. Rambutan flowers are a rich source of nectar which attracts bees, ants and flies, and is responsible for the pollination of the plant.

16. Rambutan produces round-shaped berries that are arranged in dense clusters. The fruit has thin reddish or orange-yellow rind covered with long, soft spines on the surface. 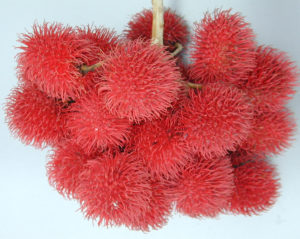 17. The glossy brown seed of a rambutan is surrounded with grape-like white or pinkish flesh.

18. Rambutan produces fruit two times per year. It starts to produce fruit 5 to 6 years after planting, with each tree producing 5,000 to 6,000 fruit per season.

19. Rambutan is a rich source if dietary fibers and contains a moderate amount of vitamin C, vitamin B3, and minerals such as iron, calcium and copper.

20. Rambutan has a pleasant, sweet, slightly acidic taste which resembles a mix of mangosteen, lychee and kiwi. It can be eaten alone or mixed with other tropical fruits. 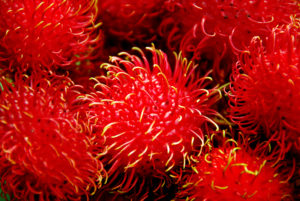 22. The soft and crunchy rambutan seed is also edible; however, it needs to be thermally processed first.

23. Oil extracted from the rambutan seed can be used as cooking oil. The oil is also used for the manufacturing of candles and soaps.

24. A home-made hair mask made of crushed rambutan leaves and water nourishes the hair and improves its quality.