Junpier berries are the female seed cones produced by the various species of junipers. They aren’t true berries but cones with usually fleshy and merged scales, which give it the berry-like appearance. Take a look below for 23 more interesting and fascinating facts about juniper berries.

1. Cones from a handful of juniper species, especially Juniperus communis, are used as a spice, particularly in European cuisine, and also to give gin its distinctive flavor.

2. Junpier berries may be the only spice that derives from conifers.

3. All juniper species grow berries, but some are considered too bitter to eat. 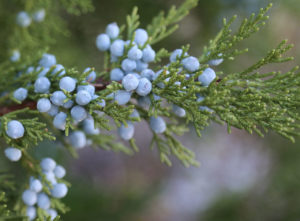 5. The Juniperus sabina species of juniper berries are toxic.

7. Juniper berries are green when young, and mature to a purple black color over about 18 months in most species, including Juniperus communis.

8. Juniper berries are used in northern European and particularly Scandinavian cuisine to impart a sharp, clear flavor to meat dishes.

10. Juniper berries are often used to flavor gin, a liquor developed in the 17th century in the Netherlands. 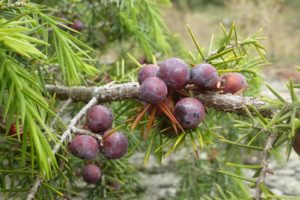 11. The name “gin” comes from either the French “genievre” or the Dutch “jenever,” which both mean juniper.

12. The Finnish rye and juniper beer known as sahti is flavored with both juniper berries and branches.

13. The brand Dry Soda produces a juniper berry soda as part of its product line.

14. Some American distilleries have begun using New World varieties of juniper such as Juniperus occidentalis as part of their distilling process.

15.  A few North American juniper berry species produce a seed cone with a sweeter, less resinous flavor than those typically used as a spice. 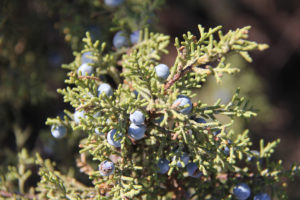 16. Juniper berry seed cones were just as a nutritive food by some Native Americans.

17. Native Americans used the seeds inside juniper berries as beads for jewellery and decoration.

18. An essential oil extracted from juniper berries is used in aromatherapy and perfumery.

19. While they’re classified as generally recognized as safe in the United States, juniper berries may have various side effects that have not been tested extensively in clinical trials. Mainly due to an increased risk of miscarriage, even in small doses, consuming juniper berries may affect pregnant or breastfeeding women and people with diabetes. 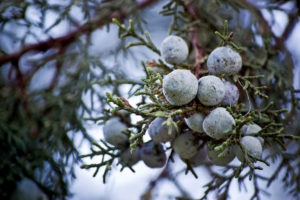 21. In an in vitro study, juniper essential oil was studied for its possible antimicrobial and antifungal properties.

22. Juniper berries have been found in ancient Egyptian tombs at multiple sites. The berries imported into Egypt may have come from Greece, as the Greeks record using juniper berries as a medicine long before mentioning their use in food.

23. The Greeks used juniper berries in many of their Olympic events because of their belief that the berries increased physical stamina in athletes.