Starfire, also known as Koriand’r, is a fictional superhero appearing in American comic books published by DC Comics. She was created by Marv Wolfman and George Perez, and she debuted in a preview story inserted within DC Comics Presents #26. The name “Starfire” first appeared in a DC Comic in the story “The Answer Man of Space.” Take a look below for 23 more fun and fascinating facts about Starfire.

1. Starfire’s body continually absorbs ultraviolet radiation, which she then converts into the energy that powers her starbolts and her ability to fly.

2. Although Starfire has been romantically involved with both Jason Todd and Dick Grayson, she was originally unaware of the history between the two. She she of Jason’s falling out with Batman but never knew of the many occasions where Jason and Dick tried to kill each other.

4. Blackfire is Starfire and Wildfire’s older sister, the firstborn princess, and eldest daughter of the long-dead king and queen of Tamaran. She is the former grand ruler and empress of Tamaran. She serves as Starfire’s arch-nemesis. 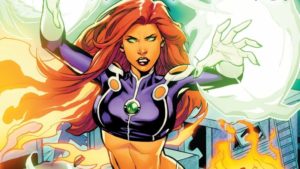 5. Starfire can learn any language through a kiss.

6. Starfire has the ability to launch ultra violet projects from her body, along with decelerated aging, limited invulnerability and enhanced human capabilities.

7. In the New 52, Starfire’s powers are so advanced that she killed a citadel guard as a child and she has full control of her body temperature so much so that she can melt metal with skin contact.

8. In Superman/Batman Public Enemies, Jennifer Hale is credited for the voice of Starfire. Jennifer Hale has voice acted for other projects such as Avengers Earth’s Mightiest Heroes, Totally Spies, Ben 10 and Scooby Doo.

9. In the early comics, Starfire’s race were descendants of cats. This was briefly shown when she cleaned silks with her tongue.

10. Starfire hates the Lantern Corp for what she sees as abandoning Tamara and other civilizations to their fates, seeing it as blatantly going against their vow of letting no evil escape their sight.

11. Koriand’r is amazing with kids and is always protective of them, treating them like her own. Because of this, Damian will often slip up and refer to her as his mother and Kori doesn’t bother to correct him because she openly loves it.

12. The Tamaraneans are an emotional race who see feelings as the force that drives their very livelihood. In fact, it’s their emotions that fuel their natural ability of flight. Because of this, Starfire is inherently the most sensitive member of the Teen Titans. 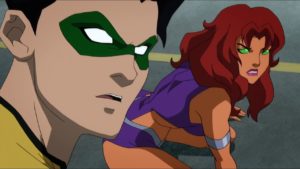 13. Starfire was cared for as a child by Galfore, who first appeared in Betrothed. While her older sister, Blackfire, is alive, her younger brother, Wildfire, was sent away when the Gordanians attacked Tamaran.

14. Blackfire hates Starfire because she dethroned her on Tamaran, and left the crown to Galfore, which was her adoptive father.

16. Mother Mae-Eye’s nickname for Starfire is Twinkle Star, which is a reference to the poem “Twinkle Twinkle Little Star.”

18. Although Starfire was freed from the clutches of the Gordanians and the Citadel, her memories of her imprisonment still haunt her. For example, upon seeing The Creature from Jones Lake, she screams in terror, possibly due to its resemblance to a Citadelian. 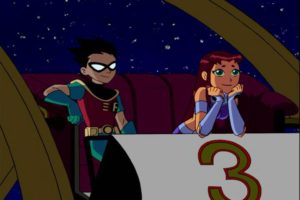 20. In the Teen Titans episode “Mother Mae-Eye,” Starfire stated that she has 9 stomachs, which may explain why she eats so much.

22. Starfire’s outfit is fairly different from her comic counterpart, being much less revealing in consideration of the younger audience. It’s changed to a purple two piece attire instead of a strap brassiere.

23. Starfire appears in a total of 63 episodes of the Teen Titans series, one of which she has no spoken lines in. In addition, she appears in the series finale, Trouble in Tokyo, and all the video games based on the series.