Blazing Skull, or Mark Anthony Todd, is a fictional superhero that appears in American comic books published by Marvel Comics. He was created during the Golden Age of Comics Books by Marvel’s predecessor, Timely Comics, and first appeared in Mystic Comics #5. Take a look below for 23 more fun and fascinating facts about Blazing Skull.

2. While Blazing Skull looks very similar to Ghost Rider, the two are not related.

3. Blazing Skull was debuted in The Story of Mark Todd, a nine page story in the 1941 comic that also introduced cover character the Black Marvel and fellow superhero the Terror.

4. He continued to appear in Mystic Comics through issue number nine, with at least one story confirmed to have been penciled by Golden Age great Syd Shores. 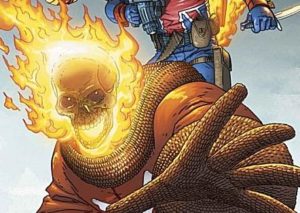 5. A simulacrum of the Blazing Skull briefly appeared, along with simulacra of the Patriot, the Fin, and the Golden Age Angel and Vision, to aid the superhero team the Avengers in The Avengers #97.

6. Ghost Rider temporarily used the alias Blazing Skull in Marvel Team-Up #91 while mind-controlled by Moondark and exhibited in a carnival freak show.

7. Jim Scully, also known as Skull the Slayer, was depicted as an unrelated and differently designed Blazing Skull in Quasar #46 as part of the group Shock Troop.

8. On his first assignment, Mark Todd was sent to Japan, where he found a race of super-intelligent Skull-Men. They accepted Todd and taught him occult secrets and gave him a burning mask. This was the beginning of the Burning Skull.

9. In the early Golden Age stories, Mark Todd’s given occupation is district attorney. He’s also referred to in one story as an amateur criminologist.

10. In the 1990s, starting with the retroactive Invaders series, Mark Todd was established as a newspaper reporter.

11. In modern times, Blazing Skull appears as a captive of Middle Eastern terrorists, having not aged in the decades since the war due to his healing factor.

12. Blazing Skull is recruited by the Fifty State Initiative to become part of New Jersey’s superhero team the Defenders, alongside She-Hulk, Nighthawk and Colossus.

13. Blazing Skull was recruited by Howard the Duck and A.R.M.O.R. to be part of the Ducky Dozen on a mission to stop the Nazi zombies from traveling to other realities.

14. In his Blazing Skull form, Todd has superhuman strength, can generate heat and flame and is incredibly durable.

15. In his normal form, Mark Todd doesn’t seem to age and can go at least several days without food or water. 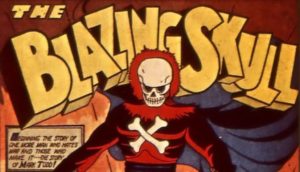 16. Mark Todd possesses a healing factor which has caused him to have not physically aged at all since World War II.

18. Due to being trained by the Skull-Men, Blazing Skull is immune to fire.

19. Blazing Skull gains the ability to generate and project flames only later on in his life.

20. During World War II, Blazing Skull teamed up with Union Jack and the Destroyer to break up an enemy spy-ring in England.

21. After gaining his Blazing Skull powers, Todd came into contact with the World War II superhero team, the Invaders, and aids them against a team of Axis superhumans, saving the life of Namor the Sub-Mariner. 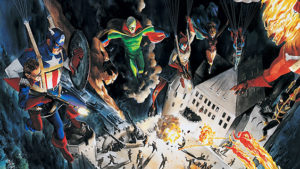 22. During World War II, Blazing Skull fought alongside the Invaders during a massed Allied superhuman airdrop into a Nazi stronghold.

23. During the Golden Era stories, Blazing Skull mastered the Skull-Men’s teachings and gained the ability to turn his flesh invisible, mimicking his teachers’ appearance.