The tamarillo is a small tree or shrub in the flowering plant family Solanaceae. It’s best known as the species that bears the tamarillo, an egg-shaped edible fruit. Take a look below for 23 more fun and fascinating facts about tamarillo.

2. Tamarillo is native to the Andes of Ecuador, Colombia, Peru, Chile and Bolivia.

3. The first internationally marketed crop of tamarillos in Australia was produced around 1996, although permaculture and exotic enthusiasts had increasingly grown the fruit around the country from the mid-1970s and onward.

4. In New Zealand, about 2,000 tons of tamarillo are produced on 200 hectares of land and exported to the United States, Japan and Europe. 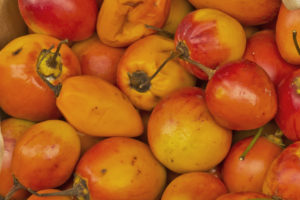 5. Tamarillo is successfully grown at higher elevations of Malaysia, the Philippines and in Puerto Rico.

6. Prior to 1967, tamarillo was known as the “tree tomato” in New Zealand, but a new name was chosen by the New Zealand Tree Tomato Promotions Council in order to distinguish it from the ordinary garden tomato and increase its exotic appeal.

7. Tamarillo is a fast growing tree that grows up to 5 meters in height. Its peak production is reached after 4 years, and its life expectancy is about 12 years.

8. The leaves of a tamarillo tree are large, simple and perennial, and have a strong pungent smell.

9. The flowers of a tamarillo tree are pink-white, and form clusters of 10 to 50 flowers. They produce 1 to 6 fruits per cluster.

10. Tamarillos are egg-shaped and about 4 to 10 centimeters long. Their color varies from yellow and orange to red and almost purple. 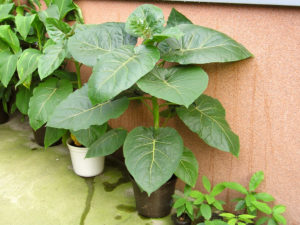 11. Tamarillos have a firm texture and contain more and larger seeds than a common tomato.

12. Some people in New Zealand cut a tamarillo in half, scoop out the pulpy flesh and spread it on toast at breakfast.

13. The yellow colored version of tamarillos have a sweet flavor and are occasionally compared to mangoes and apricots.

14. The red-fruited variety of tamarillo, which is much more widely cultivated, is more tart, and the savory aftertaste is much more pronounced.

15. Tamarillos can be made into compotes, or added to stews, hollandaise, chutneys and curries. 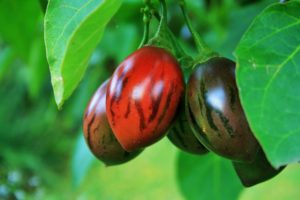 16. In Colombia, Ecuador, Panama and parts of Indonesia, fresh tamarillos are frequently blended together with water and sugar to make juice.

17. In Nepal, a version of the South American tamarillo is popular. It’s usually eaten as a chutney or a pickle during the autumn and winter months.

18. In Ecuador, the tamarillo, known as “tomate de arbol”, is blended with chili peppers to make a hot sauce commonly consumed with local dishes of the Andean region.

19. Tamarillo is high in pectin which means that it has good properties for preserves. However, they oxidize and lose color when treated.

20. In Ecuador, the native would warm tamarillo leaves and wrap them around the neck to treat inflamed tonsils. The absorption of heat via the leaves helps reduce the pain. 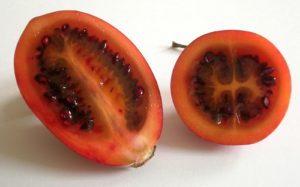 21. In Colombia, people would make a poultice out of tamarillo by cooking it in embers for external medicinal use.

22. Anthocyanins contained in the darker tamarillo have potent antioxidants, which help combat free radicals that cause cancer. They also have anti-microbial and anti-inflammatory properties that stave off cancerous outbreaks.

23. Tamarillo is packed with vitamin A, vitamin C, vitamin E and pro-vitamin A. It also has a good amount of B-complex vitamins such as niacin, thiamine and riboflavin.