Brute is a fictional character that appears in American comic books published by Marvel Comics. He’s the Counter-Earth’s version of Mister Fantastic, or Reed Richards. He first appeared in Marvel Premiere #2 and was created by Roy Thomas and Gil Kane. Take a look below for 23 more fascinating and fun facts about Brute.

2. Brute received an entry in the Marvel Legacy: The 1970s Handbook #1, and the Official Handbook of the Marvel Universe A to Z HC.

3. He is a version of Reed Richards from a world created by the High Evolutionary called Counter-Earth.

4. He was exposed to cosmic rays that initially didn’t affect him; Johnny Storm and Ben Grimm were unaffected, and Susan Storm was left in a comatose state. 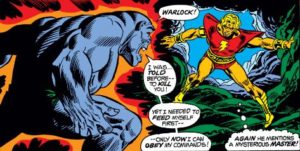 5. The cosmic rays eventually gave Reed Richards of Counter-Earth the ability to transform into a savage purple skinned behemoth called the Brute.

6. The Brute became evil after being hit on the head with a metallic cylinder.

7. Brute made his way to True Earth, where he joined the Frightful Four to bear the Fantastic Four, Thundra and Tigra.

8. During a fight with the Fantastic Four, Brute managed to trap the original Reed Richards in the Negative Zone and replace him.

9. Once Brute was accepted as the leader of the Fantastic Four, he sent the Human Torch and the Thing into the Negative Zone and battled with Invisible Woman. 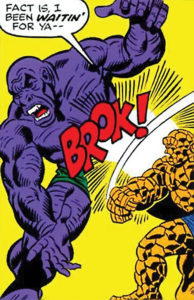 11. Brute was glimpsed when Abraxas scanned through the alternate Earths.

12. Brute was shown among the Reed Richards to be among the victims of Abraxas’ attack.

13. During the Avengers: Standoff! storyline, Brute was an inmate of Pleasant Hill, a gated community established by S.H.I.E.L.D.

14. Reed Richards can transform at will into the Brute, who possesses a 9 foot tall form with significant superhuman strength and durability.

15. Brute still has the brilliant genius and much of the knowledge of Reed Richards.

16. At one point, Brute prove to be able to absorb geothermal energy from the Earth’s core, increasing his own power. In that form, he could also fire energy blasts.

17. The Brute makes an appearance in the tie-in comic, Spider-Man Unlimited.

18. Brute is skilled in manipulating others, especially when tricking others into thinking that he’s the real Reed Richards of their respective reality.

19. He has a shifting mental state that causes him to their become good or evil depending on the circumstance.

20. The Brute’s bodily tissues are substantially harder and more resistant to injury than the tissues of an ordinary human, allowing him to withstand attacks that normally kill an average person. He’s also able to survive floating in the Negative Zone’s Distortion Zone.

21. At one point, Brute appeared as an inmate of Pleasant Hill. 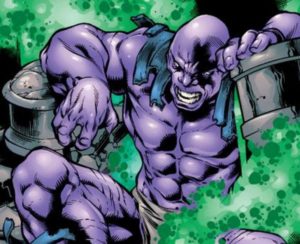 22. When Brute posed as the Earth-1123 Reed Richards, he used his counterpart’s fame to become the President of the United States.

23. As the Earth-1123 Reed Richards, Brute clashed with Wolverine of Earth-811 and Spider-Girl of Earth-1122, who had come to warn him of the threat posed by the Celestial embryo growing in the core of that Earth.