Honeyberries are a honeysuckle native throughout the cool temperate of the Northern Hemisphere. They’re available in countries such as North America, Canada, Japan, Russia and Poland. Take a look below for 22 more interesting and fascinating facts about honeyberries.

1. The leaves of the honeyberry tree are opposite, oval, 3 to 8 centimeters long and 1 to 3 centimeters broad, greyish green, with a slightly waxy texture.

2. The flowers of the honeyberry tree are yellowish-white, 12 to 16 millimeters long, with five equal lobes. They are produced in pairs on the shoots.

3. The honeyberry is edible and is somewhat rectangular in shape, weighing 1.3 to 2.2 grams, and being about 1 centimeter in diameter.

4. Honeyberries are circumpolar, meaning that they’re found in or near wetlands of boreal forests in heavy peat soils. However, they can also be found in high-calcium soils, in mountains, and along the coasts of northeastern Asia and northwestern North America. 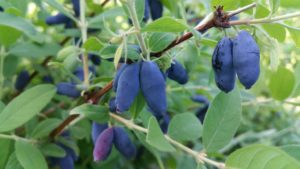 5. Honeyberries are winter-hardy and can tolerate temperatures below -47 degrees Celsius.

6. The haskap variety of honeyberries have been used frequently in breeding efforts, but other varieties have been bred with it to increased productivity and flavor.

7. Powdery mildew tends to affect honeyberries, usually after the fruit matures in mid to late summer.

8. When the honeyberry plant is affected with powdery mildew, it’s common for the leaves to turn white with brown patches eventually developing.

9. Honeyberries are harvested in late spring or early summer two weeks before strawberries for Russian type varieties, with Japanese types ripening at a similar time to strawberries.

10. Honeyberries are ready to harvest when the inner layer is dark purple or blue. 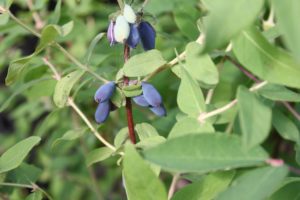 11. In North America, most Russian varieties of honeyberries are adapted to hardiness zones 1 to 4.

12. Honeyberry plants can take 3 to 4 years to produce an abundant harvest.

13. The average production on a good honeyberry plant is about 3 kilograms, or 6.6 pounds, and it can maintain productivity for about 30 years.

14. Honeyberries can be used in various processed products, such as pastries, jams, juice, ice cream, yogurt, sauces, candles and a wine similar in color and flavor to red grape or cherry wine.

15. For centuries in East Asian countries, honeyberries have been used for supposed therapeutic applications in traditional medicine. 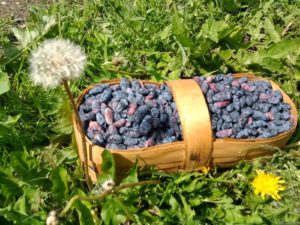 16. Honeyberries have a higher level of antioxidants than blueberries.

17. Honeyberries don’t sucker but send up shoots from the root crown.

18. Many honeyberries require proximity to another unrelated honeyberry plant for pollination by bees and other insects. Some varieties will produce some fruit alone.

19. Birds love honeyberries and if the plant isn’t protected, they will destroy it.

20. Weeds should be kept away from young honeyberry plants until the shrubs are well established. 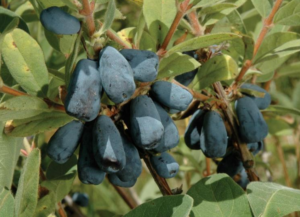 21. The University of Saskatchewan began breeding honeyberries in 2002. Using lines from Russia, Japan and the Kuril Islands north of Japan, this program is producing fruit that is sweeter and superior in taste to many other honeyberry varieties on the market.

22. Honeyberries are known as “zhimolost” in Russia and “haskap” in Japan.