1. People who go to this area can still stand at the northeastern corner of the Place du Forum, where van Gogh set up his easel.

2. Van Gogh looked south towards the artificially lit terrace of the popular coffee house, as well as into the enforced darkness of the rue du Palais leading up to the building structure.

3. The painting is currently located at the Kroller-Muller Museum in Otterlo, Netherlands.

4. When it was exhibited for the first time, in 1891, the painting was called Coffeehouse, in the evening.

5. This is the first painting in which van Gogh used a starry background. He went on to paint the star filled skies in Starry Night Over the Rhone and The Starry Night a year later.

6. Van Gogh mentioned the Cafe Terrace at Night painting in a letter written to Eugene Boch on October 2, 1888, writing that he had painted, “a view of the cafe on place du Forum, where we used to go, painted at night.”

7. The painting and the cafe were both featured in the 1956 movie Lust for Life starring Kirk Douglas and later in “Vincent and the Doctor.” 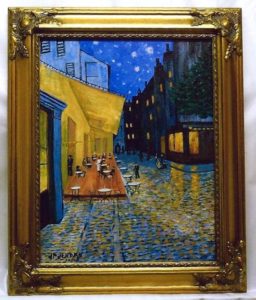 8. The painting is an ideal example of his imagination and superb dealing with light. The painting captures the colors of light at night perfectly.

9. When he finished the painting, van Gogh wrote a letter to his sister mentioning that he has completed a night scene without using the color black.

10. The right side of the painting shows other buildings and several pedestrians on the cobbled street. Overhead, the sky is dotted with stars.

11. There are several people seated around the white tables on the terrace, which is covered by a large awning.

12. There’s a waiter, dressed mostly in white, standing in front of one of the tables, holding a tray.

13. According to the curators of the Van Gogh Museum, the painting is a depiction, “of drinkers in the harsh, bright lights of their illuminated facades”, which is from Maupassant’s novel Bel Ami.

14. In 1981, Bogomila Welsh-Ovcharov argued that since it displays not only a night scene but also a funnel-like perspective and dominant blue-yellow tonality, it was at least partially inspired by Louis Anquetin’s Avenue de Clichy: 5 o’clock in the evening.

15. An academic paper that was presented at IAFOR’s 2013 European Conference on Arts and Humanities, introduced a theory that van Gogh intended the painting to be a uniquely innovated Last Supper.

16. Two weeks after finishing the painting, van Gogh wrote a letter to his brother Theo where he stated, “that doesn’t stop me having a terrible need for – dare I say the word – for religion. So I go outside at night to paint the stars and I always dream a painting like that with a group of living figures of the pals.” 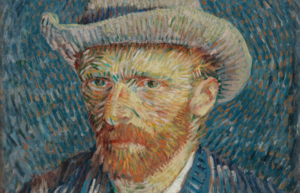 17. Van Gogh used many contrasting colors and tones for this painting, bringing in a pulse of colors that defy the darkening night sky.

18. The brushstrokes on Cafe Terrace at Night are reminiscent of van Gogh’s sense of thrill and rapture as he painted the cafe at night.

19. It’s painted in a typical Cloisonnist style, while the myriad subjects in the composition are painted flat and elegant outlines in black coerce the artwork.

20. The painting has also been influenced by Japanese woodcuts as the author Frederic Destremau points out, “the iron and glass awning… suggests the roof of a pagoda, the legs… recall Japanese lanterns, the elegant woman … drawn in a very Japoniste style.”

21. While many people have tried to buy the painting, the Kroller-Muller Museum has stated that the painting is priceless and refuses to sell.