My Fair Lady is a 1964 American musical movie adapted from the Lerner and Loewe eponymous stage musical based on the 1913 stage play Pygmalion by George Bernard Shaw. With a screenplay by Alan Jay Lerner and directed by George Cukor, the movie depicts a poor Cockney flower seller named Eliza Doolittle who overhears an arrogant phonetics professor, Henry Higgins, as he casually bets that he could teach her to speak “proper” English, thereby making her presentable in the high society of Edwardian London. Take a look below for 30 more fun and interesting facts about My Fair Lady.

2. The movie was both a critical and commercial success, winning eight Academy Awards, including Best Picture, Best Actor and Best Director.

3. In 1998, the American Film Institute named it the 91st greatest American movie of all time.

4. When Audrey Hepburn was first told that her voice wasn’t strong enough and that she would have to be dubbed, she walked out. She returned the next day and, in a typically graceful Hepburn gesture, apologized to everyone for her, “wicked behavior.”

5. Audrey Hepburn later admitted that she would never have accepted the role of Eliza Doolittle if she had known that producer Jack L. Warner intended to have nearly all of her singing dubbed. After making My Fair Lady, Hepburn resolved not to appear in another movie musical unless she could do the singing on her own. 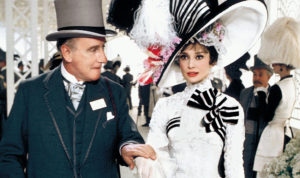 6. Although she played a 19 year old, Audrey Hepburn was actually 35 in real life. Jeremy Brett, who turned 30 during filming, was cast as 20 year old Freddie, so Hepburn wouldn’t seem too old in comparison.

7. When Rex Harrison accepted his Academy Award for the movie, he dedicated it to his “two fair ladies”, Audrey Hepburn and Julie Andrews, both of whom had played Eliza Doolittle with him.

8. Cary Grant told Jack L. Warner that not only would he not play Henry Higgins, but if Rex Harrison was not cast in the role, he wouldn’t even go see the movie.

9. Walt Disney offered to delay filming on Mary Poppins until the summer of 1964 if Julie Andrews was cast as Eliza Doolittle.

10. Rex Harrison’s microphone, which was hidden in his neckties, would occasionally pick up police broadcasts from passing police cars.

11. The story takes place in 1912, although other sources place it earlier. The King in the fantasy sequence is clearly supposed to be King Edward VII and not King George V. 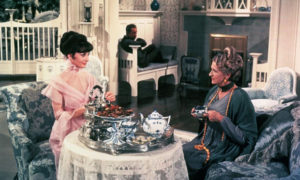 12. Jeremy Brett, who celebrated his 30th birthday during filming, was very surprised to learn that all of his singing was to be dubbed by a 43 year old American named Bill Shirley, especially since his own singing voice at the time was very good.

13. When asked why he turned down the role of Henry Higgins, Cary Grant said that his original manner of speaking was much closer to Eliza Doolittle.

14. Despite having extensive vocal training after landing the part of Henry Higgins in My Fair Lady, Rex Harrison was unable to sing a note. In the end, the director gave up and told him to quasi-speak the whole thing as he had done in the stage version.

15. Audrey Hepburn herself revealed years later that had she turned down the role of Eliza, the next actress to be offered it wouldn’t have been Julie Andrews but Elizabeth Taylor, who wanted it desperately.

16. Audrey Hepburn announced the assassination of President John F. Kennedy to the devastated cast and crew immediately after filming the number “Wouldn’t It Be Loverly?” on the Covent Garden set on November 22, 1963.

17. The title for the movie comes from a line in a traditional rhyme: “London Bridge is falling down, my fair lady.” 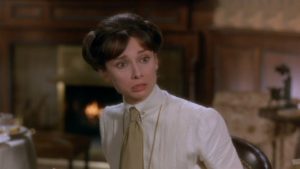 18. Alan Jay Lerner was very annoyed by Jack L. Warner’s decision to have the entire movie filmed on sound stages in Hollywood, even for outdoor scenes.

19. When Audrey Hepburn entered the set for the first time in Eliza’s gown for the ball, she was so beautiful that the crew and the rest of the cast stood silently gaping at her, then broke out with applause and cheers.

20. Amusement park trams were rented to carry ballroom scene extras across the studio lot, in order to prevent their makeup and costumes from getting dirty or damaged.

21. The musical was supposed to be called Lady Liza, but Rex Harrison refused to countenance a title based on the name of the female lead.

22. At $17 million, My Fair Lady was the most expensive Warner Brothers movie produced at the time. Nevertheless, it went on to become one of the biggest grossing movies of 1964.

23. Rex Harrison had given up smoking after suffering from pains in his legs. He didn’t like the fact that Audrey Hepburn smoked three packs of cigarettes per day.

24. The American Marni Nixon had to practice a Cockney accent before she could dub all of Audrey Hepburn’s singing in the movie. 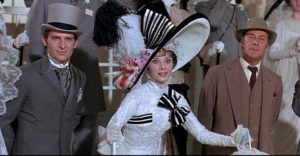 25. Of the main cast, only Stanley Holloway actually sang. The others were either dubbed or just talked their way through the songs.

26. The title of the movie appears nowhere in the dialogue nor any of the song lyrics.

27. The “marbles” Higgins puts in Eliza’s mouth are actually grapes.

28. Production designer Gene Allen was never given a budget to work from. He just designed and had built all the sets without having to worry about how much they would cost. 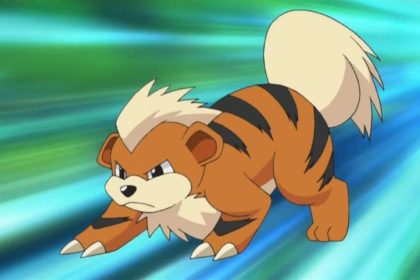 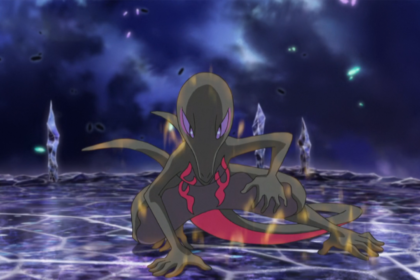 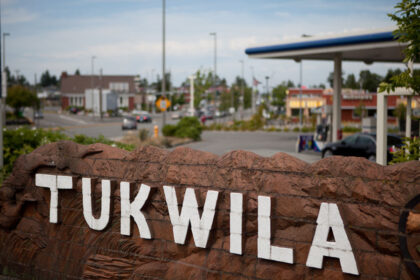