Sir Alfred Joseph Hitchcock was an English film director and producer, widely regarded as one of the most influential filmmakers in the history of cinema. Known as “the Master of Suspense,” he directed 53 feature films in a career spanning six decades, becoming as well-known as any of his actors thanks to his many interviews, his cameo roles in most of his films, and his hosting of Alfred Hitchcock Presents. Take a look below for 30 more awesome and interesting facts about Alfred Hitchcock.

1. Born on the outskirts of London, Hitchcock entered the film industry in 1919 as a title card designer after training as a technical clerk and copy writer for a telegraph-cable company.

2. His first successful movie, The Lodger: A Story of the London Fog, helped to shape the thriller genre, while his 1929 movie, Blackmail, was the first British “talkie.”

3. Two of his 1930s thrillers, The 39 Steps and The Lady Vanishes, are ranked among the greatest British movies of the 20th century.

4. By 1939, Hitchcock was a filmmaker of international importance, and film producer David O. Selznick persuaded him to move to Hollywood.

5. A string of successful films followed in Hollywood, including Rebecca, Foreign Correspondent, Shadow of a Doubt, and The Paradine Case. 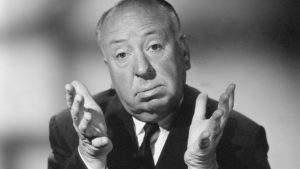 6. His movie, Rebecca, was nominated for 11 Oscars and won the Academy Award for Best Picture.

7. The “Hitchcockian” style includes the use of camera movement to mimic a person’s gaze, thereby turning viewers into voyeurs, and framing shots to maximize anxiety and fear.

9. By 1960, Hitchcock had directed four films often ranked among the greatest of all time: Rear Window, Vertigo, North by Northwest and Psycho.

10. By 2016, seven of his movies had been selected for preservation in the United States National Film Registry, including his personal favorite, Shadow of a Doubt. 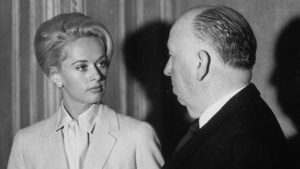 11. He received the AFI Life Achievement Award in 1979 and was knighted in December that year, four months before he died.

12. Hitchcock attended the Jesuit School St. Ignatius College, London; School of Engineering and Navigation and the University of London.

13. According to Hitchcock, he had a very sheltered and lonely childhood, obesity being a part of the reason. He said that his mother would make him stand, for hours, at the foot of her bed and narrate his daily events.

14. Due to his height and weight, he was condoned from serving in the British military with a “C3 classification” during the First World War.

15. His first job was as an advertising designer and draftsman for Henley’s, a cable company. His creative writing career begun with, “The Henley Telegraphy,” their in-house publication of the company.

16. Hitchcock considers the suspense thriller “The Lodger” as his first film because of its commercial and critical success in the United Kingdom.

18. Alma Reville was only a day younger than him. Their daughter, Patricia Hitchcock, had also appeared in three of his films.

19. The majority of the motion picture studious rejected Hitchcock, citing that he could not make a Hollywood style picture. 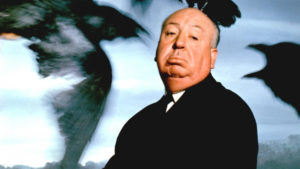 20. In his movies, Hitchcock preferred casting major established actors with whom the audiences were familiar. He said that it enabled him to shift his focus and concentrate more on the plot.

21. His use of shadows to create suspicion and tension to keep up the suspense in his screenplay narration was unique and kept the audience hooked to the characters.

22. When he was a kid, as a way to punish him, his father sent him to the local police station with a letter. He was locked in the cell for ten minutes and sent off with a warning that, “This is what happens to people who do bad things.” He stats that this was the reason for his morbid fear of the police, which has refrained him from learning how to drive.

23. His portrayals of police have always been as bad guys, or if it is required, to die a slow, uncompromisingly grisly and gruesome death.

24. Hitchcock disliked on location shoots as he had no control over the lighting or any other crucial factors. Hence, he preferred a studio shoot for his films. This is the reason his films comprise of rear screen shots and special effects composite.

25. He said that he prefers blonde actresses because, “Blondes make the best victims. They’re like virgin snow that shows up the bloody footprints.” He also frequently uses close-up shots of a woman’s hairstyle. 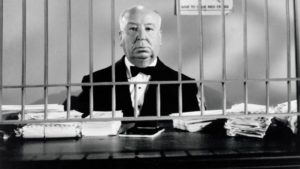 26. He was always dressed in suits on the film sets. He didn’t socialize much when he wasn’t filming. He also had a strange habit of tossing his tea cup and saucer over his shoulder after he was done drinking.

27. Hitchcock was infamous for playing practical jokes on his cast and crew.

28. Hitchcock was banned from Disneyland in the early 1960s because of the movie Psycho.

30. For one of his parties, he dressed up in drag. It was reported that footage of this was kept in his office. However, after his death, when his office was cleaned out, there was no sign of the footage. 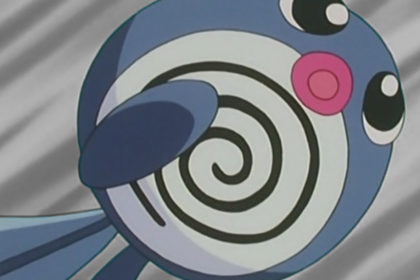 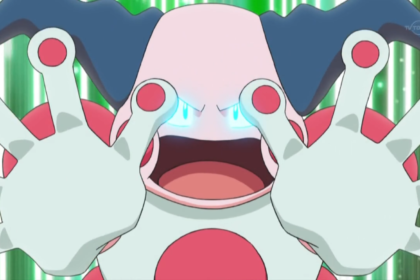