Tombstone is a 1993 American Western movie directed by George P. Cosmatos, written by Kevin Jarre, who was also the original director but was replaced early in production, and starring Kurt Russell and Val Kilmer. Supporting roles included Sam Elliot, Bill Paxton, Powers Boothe, Michael Biehn, and Dana Delany, with narration by Robert Mitchum. Take a look below for 27 more interesting and fascinating facts about Tombstone.

1. The movie is based on events in Tombstone, Arizona, including the gunfight at the O.K. Corral and the Earp Vendetta Ride, during the 1880s.

2. Tombstone depicts a number of Western outlaws and lawmen, such as Wyatt Earp, William Brocius, Johnny Ringo and Doc Holliday.

3. The movie grossed $56.5 million in domestic ticket sales, making it a financial success for the Western genre. It ranks number 16 in the list of the highest grossing Westerns since 1979.

4. The line quotes by Doc at the end of the fight at the O.K. Corral is historically true, and was reported in the Tombstone papers reporting the fight. When confronted by one of the cowboys at point blank range, the cowboy reportedly said, “I got you now Doc, you son of a bitch!”, to which Doc gleefully retorted, “You’re a daisy if you do!” 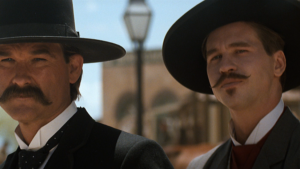 5. “I’ll be damned,” really were the final words of John Henry “Doc” Holliday. To this day, historians have debated on why Doc said that. The main theory is that Doc had become a gunfighter hoping that someone would kill him and space him the effects of tuberculosis, and that he was amazed that the disease is what killed him: not the drinking, chain smoking, gambling or gun fighting.

6. When the Earps first enter Tombstone, a grave marker can be seen in the cemetery that reads, “Here lies Lester Moore, Four slugs from a .44, No Les No More.” There is an actual tombstone in Tombstone, Arizona that has that epitaph.

8. Robert Mitchum was signed on to star as Old Man Clanton. Prior to principal photography, he fell from his horse and injured his back, forcing him to quit the part. Instead, Mitchum provides the narration at the beginning and end of the movie.

9. Director George P. Cosmatos is quoted as saying that all lightning and mustaches are real. The lightning, to which George is referring, are the images of lightening that were filmed on-location during monsoon season, however, lightning effects in acting scenes were created with “Lightning Strikes 250K Linear” units. 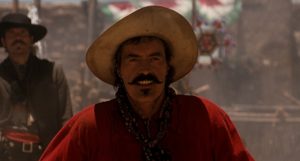 10. In the movie, Curly Bill Brocius isn’t charged with the murder of Marshal Fred White, as there were no witnesses to the shooting. In real life, charges were not filed because prior to his death, Marshal White explained the shooting was an accident.

11. Val Kilmer practiced for a long time on his quick-draw speed, and gave his character a Southern Aristocrat accent.

12. Longtime veteran western actor Glenn Ford had originally signed on as Marshall White. However, poor health forced him to withdraw. The role went to Harry Carey, Jr., who was originally cast as a wagonmaster.

14. The train car, on which Virgil and the girls leave, after departing Tombstone, is the same train car that Wyatt steps off of in the beginning of the movie.

15. The scene in which Wyatt throws an abusive card dealer out of a saloon, was to show that Wyatt was a man who used psychology to intimidate. Billy Bob Thornton’s lines in the scene were ad-libbed, as he was only told to, “be a bully.” 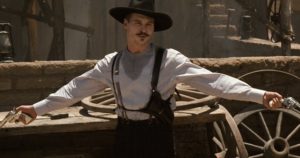 16. George P. Cosmatos liked that in the script, the gunfighting at O.K. Corral wasn’t the end of something, it was the beginning of something.

17. It was Val Kilmer’s idea to whistle on the way to the O.K. Corral.

18. Mickey Rourke turned down the role of Johnny Ringo.

19. George P. Cosmatos liked the setting of the forest for the final shoot-out between John Henry “Doc” Holliday and Johnny Ringo, as it wasn’t the usual dusty street of many Westerns.

20. When Virgil returns to the saloon and collapses after being shot, Kurt Russell accidentally bangs Sam Elliott’s head on the bar as he lifts him to lay him flat on the floor.

21. George P. Cosmatos said that the snow in the ending was a contrast to all the desert seen in the movie.

22. George P. Cosmatos claimed that Stephen Lang was drunk for most of filming. 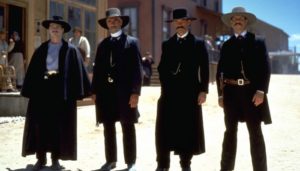 24. In an interview in the late 1990s, John Carpenter claimed that he almost directed the movie.

25. A love scene between Wyatt and Josephine was cut because George P. Cosmatos didn’t want to consummate the love story so fast. Part of the scene can be seen in the movie trailer. The scene was after they fortuitously ran into each other riding horses.

26. At one point, Wyatt says that they’ll all be, “richer than Croesus.” Croesus was a Greek king in 560 B.C., who was renowned for his wealth, and is credited with issuing the first gold coins for general use.

27. Both of the actresses who played Wyatt’s love interests are named Dana. 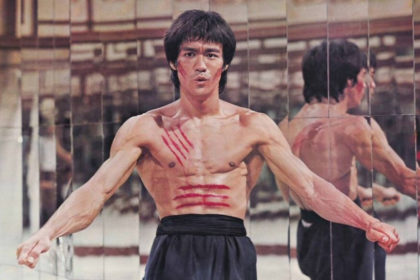 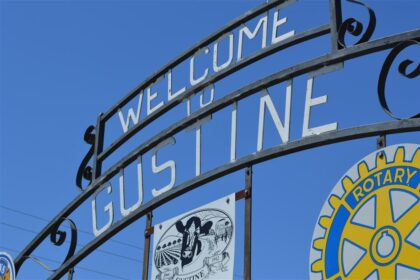 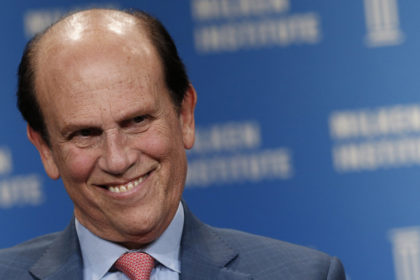